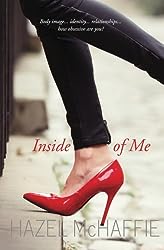 I’ve read one of Hazel McHaffie’s books in the past – Over My Dead Body and was impressed by the way she weaves facts into her fiction so seamlessly that it doesn’t detract from the story. So, when she asked if I would like to read Inside of Me I didn’t hesitate to say yes please. And I wasn’t disappointed. I think this is an excellent book and once I started reading it I didn’t want to stop, keen to find out what was going to happen next.

Hazel McHaffie’s novels all cover medical ethics issues and the issues in Inside of Me concern body image, in particular, but not exclusively, about anorexia; identity, and relationships. There is also a mystery – teenage girls are going missing, the latest one being Maria aged sixteen, last seen walking alone along Regent’s Park Canal. Tonya Grayson is worried, no terrified is a better description, that her missing husband, Victor, could be involved. But the police are convinced he is dead; his clothes were found neatly folded in a beach, although his body was never found. India, their daughter, who was eight at the time, believes, even after seven years, that he is still alive, reinforced by hearing his voice in a crowded London station, the day after Maria was reported missing.

The narrative, told in the first person, switches between Tonya and India living in Scotland, and Chris, who works in a florist shop in London, mourning the loss of a daughter. Chris, after reading the newspaper report about the missing teenager, spots Maria at a local car boot sale, offers to help and ends up taking her home, anxious about her safety.

India is anorexic, but won’t accept the truth, either that her father is dead or that she has a weight problem. Tonya tries to help her but cannot get through to her and for most of the book seems completely out of her depth, unable to move forward herself. She is plagued with doubts about Victor and his relationship with India, which had been very close. India’s best friend, Mercedes is also obsessed with her weight and encourages India both to find her father and to take even more drastic ways to gain her target weight.

Hazel McHaffie has got right inside each character’s mind, making this a compelling and convincing story. And it is a gripping story, easy to read, but by no means a comfortable read, in turns emotional and troubling. It conveys the complex dilemmas of living with eating disorders, problems with body image and difficult family relationships, issues with control and coping with emotional disturbance, obsessions and compulsive behaviour. Added to all this there is the mystery of what happened to Victor – his pile of clothes on the beach reminded me of Reginald Perrin (from the TV series  in the 1970s). I think it is a wonderful book and I don’t think I’ve read another novel like it. I’ve only touched its surface in this post!

Hazel McHaffie is a Scottish author. For details of her background and qualifications as a nurse, midwife, PhD in Social Sciences and Research Fellow in Medical Ethics see her website, where she also lists her awards, life changing experiences, and more personal stuff such as her character traits, addictions (including good books), and hobbies. She also writes a most interesting blog.