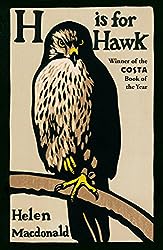 I really wanted to love H is for Hawk by Helen Macdonald, which  won the 2014 Samuel Johnson Prize for Non-Fiction, as well as the 2014 Costa Book of the Year but I found it difficult to read and draining, despite some richly descriptive narrative.  It’s really three  books in one – one about herself, her childhood and her intense grief at the sudden death of her father, one about training a goshawk and another about T H White and his book, The Goshawk in which he describes his own struggle to train a hawk.

When her father died she bought Mabel, a ten week old goshawk and became obsessed with training her. It is the training that made this book so difficult for me to read. I am not comfortable with keeping wild creatures in captivity and in my naivete I hadn’t realised just what training a hawk entailed. Even though Helen Macdonald tells her friend’s husband that it had not been a battle training Mabel because ‘she’s a freakishly calm hawk‘, it came across to me that it had been a battle of wills, as she kept Mabel indoors in a darkened room, in a hood, on a perch or restrained on a leash for much of the time. It was a physical battle too that evoked rage, violence and frustration.

I found it difficult too because it is so personal as she exposed just how bereft she was, how she suffered the loss of her father and became depressed almost to the state of madness:

It was about this time that a kind of madness drifted in. Looking back, I think I was never truly mad. More mad north-north-west. I could tell a hawk from a handsaw always but sometimes it was striking to me how similar they were. I knew I wasn’t mad mad because I’d seen people in the grip of psychosis before, and that was madness as obvious as the taste of blood in the mouth. The kind of madness I had was different. It was quiet, and very, very dangerous. It was a madness designed to keep me sane. My mind struggled to build across the gap, make a new and inhabitable world. (location 219)

This a book unlike any other that I’ve read, about wildness, grief and mourning, and obsession, which made it heavy reading for me.