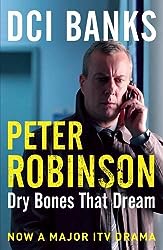 I read Peter Robinson’s DCI Banks books set in the Yorkshire Dales, every now and then, so I’m reading them totally out of order. It doesn’t seem to matter. Dry Bones That Dream is the 7th book in the series and the cover of my copy shows  Stephen Tompkinson as Banks. I don’t remember seeing this one on ITV, but I probably did as I see from the list of episodes in Wikipedia that it was broadcast in 2012.

Dry Bones That Dream was first published in the UK in 1995 and in the US later in as Final Account.

One May evening, two masked gunmen tie up Alison Rothwell and her mother, take Keith Rothwell, a local accountant, to the garage of his isolated Yorkshire Dales farmhouse, and blow his head off with a shotgun. Why? This is the question Detective Chief Inspector Alan Banks has to ask as he sifts through Rothwell’s life. Rothwell was generally known in the area as a mild-mannered, dull sort of person, but even a cursory investigation raises more questions than answers. When Banks’s old sparring partner, DS Richard ‘Dirty Dick’Burgess, turns up from the Yard, the case takes yet another unexpected twist, and Banks finds himself racing against time as the killers seem to be dogging his footsteps. Only after he pits his job against his sense of justice does he discover the truth. And the truth leads him to one of the most difficult decisions of his career.

I read this quite quickly, even though it’s just over 350 pages, in between mammoth gardening sessions (more about that later maybe). It really centres around identity and unearthing the secrets the characters have kept hidden from their family and friends. There’s also money-laundering and international and political shenanigans involved.

Much of the book revolves around Banks and his relationships, with family, colleagues and the people he interviews in connection with Keith Rothwell. Banks seems to be at a pivotal moment in his personal life. As usual with the DCI Banks books  we are told what music Banks listens to which got a bit monotonous for me and the descriptions of what each character looked like and the clothes they were wearing didn’t add anything to the plot. I did have an inkling about the truth about Rothwell’s murder but thought I was being too fanciful and that it was an unlikely scenario – it wasn’t. But I did enjoy reading it anyway even with these drawbacks.