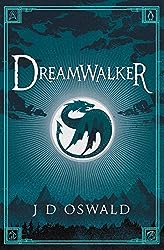 I’m currently reading The Interpretation of Murder by Jed Rubenfeld. I have mixed feelings about it, alternating between thinking it’s good, not so good, and just about OK, so I carry on reading. It’s historical fiction based on Freud’s visit to New York in 1909, accompanied by Jung, when a young woman is brutally murdered and a second is attacked and left unable to speak. A mixture of murder mystery and psychoanalysis with an interpretation of ‘Hamlet‘ thrown in. I’ve nearly finished this book.

I’m also reading Dreamwalker: The Ballad of Sir Benfro Book One by James Oswald on my Kindle. This is fantasy fiction, not the sort of book I read very often, so it makes a refreshing change. This is inspired by the language and folklore of Wales, following the adventures of a young dragon, Sir Benfro, in a land where his kind have been hunted near to extinction by men. I’ve read about 25% of the book so far.

I’ve recently finished reading Dacre’s War by Rosemary Goring, a new book which will be published in June. My copy is a pre-publication review copy courtesy of www.lovereading.co.uk. I loved this book, historical fiction set in the Scottish and English Borders and London between 1523 – 1525, full of political intrigue and personal vengeance. My review will follow soon.

There are several books lining up that I’m keen to read next. I’m not sure which one to choose. It’s been a while since I read an Agatha Christie, so it could be The Moving Finger, a Miss Marple mystery. Or it could be Elizabeth is Missing by Emma Healey, or Nora Webster by Colm Tobin, or The Last Girl, the third Maeve Kerrigan book by Jane Casey. Or something completely different!