Ed McBain is the pseudonym of Salvatore Lombino (1926 – 2005). He wrote children’s books, science fiction and westerns before writing crime fiction. He also wrote books under the name of Evan Hunter, most notably The Blackboard Jungle, which was later made into a film. He also wrote the screenplay for Alfred Hitchcock’s 1963 film The Birds, (which in turn was loosely based on Daphne du Maurier’s short story of the same name). 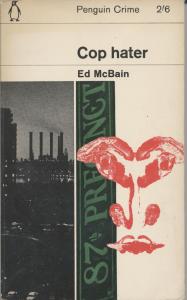 Cop Hater is the first in his series of 87th Precinct books and to my mind is a classic in the police procedural genre with its emphasis on the police routine investigations and on the importance of forensics in detection work. It’s a step back in time to the 1950s. The cover I’ve shown is of my copy reprinted in Penguin’s Crime Series in 1964, the original book was published in 1956.

It’s summer, a heatwave in the city (not named, but suspiciously like New York) and someone is targeting and killing cops, first Mike Reardon, then his partner David Foster. Hank Bush and his partner Steve Carella are struggling to find any clues to identify the murderer. But when Bush is killed with the same weapon, a Colt .45 Carella gets his break. Fortunately Bush managed to wound his attacker and the forensics team are able to piece together a remarkable analysis of the killer:

The killer is a male, white, adult, not over say fifty years of age. He is a mechanic, possibly highly skilled and highly paid. He is dark complexioned, his skin is oily, he has a heavy beard which he tries to disguise with talc. His hair is dark brown and he is approximately six feet tall. Within the past two days he took a haircut and a singe. He is fast, possibly indicating a man who is not overweight. Judging from the hair, he should weigh about 180. He is wounded, most likely above the waist, and not superficially. (page 122)

The general theory is that the killer is a ‘cop hater’, someone with a grudge against the police, whereas Carella has a different idea and when he talks to Savage, a journalist about it, Savage prints his words, putting Carella’s girlfriend in deadly danger as a result.

This is a great book. I loved McBain’s style, with vivid, precise descriptions of the city, the sizzling, suffocating heat and the characters. The dialogue is terse, tense and to the point and the plot moves quickly as the tension mounts towards a dramatic climax.

McBain is not just good on crime investigation and description. His characters, even the minor ones are real people, like Carella’s girl friend Teddy Franklin for example. I like the way he lets us know that she is deaf by Carella cursing the telephone because ‘it was worthless with a girl like Teddy’ and on then on the next page he clarifies that she’s dumb too – ‘her face was her speaking tool‘.

I love this description of a brief break in the heatwave as a storm hit the city.

It seemed the rain would never come. The lightning was wild in its fury, lashing the tall buildings, arcing over the horizon. The thunder answered the spitting anger of the lightning, booming its own furious epithets.

And then, suddenly, the sky split open and the rain poured down. Huge drops, and they pelted the sidewalks and the gutters and the streets; and the asphalt and concrete sizzled when the first drops fell: and the citizens of the city smiled and watched the rain, watched the huge drops – God, how big the drops were! – splattering against the ground. And the smiles broadened, and people slapped each other on the back, and it looked as if everything was going to be all right again.

Then suddenly the rain stopped.

It had burst from the sky like water that had broken through a dam. It rained for four minutes and thirty seconds. and then, as though someone had suddenly plugged the broken wall of the dam, it stopped.

The lightning still flashed across the sky, and the thunder still growled in response, but there was no rain.

The cool relief the rain had brought lasted no more than ten minutes. At the end of that time, the streets were baking again, and the citizens were swearing and mumbling and sweating.

There are plenty of books in the 87th Precinct series and I hope to read more of them.