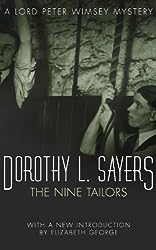 Today’s pick is a book that I mentioned in my post the other day on New Additions at BooksPlease. It’s Burial of Ghosts by Ann Cleeves. 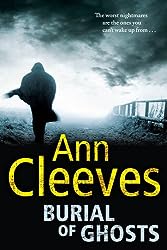 My nightmares feature knives and blades and blood. I don’t do falling down holes or being chased through deserted streets. And though I usually dream in black and white, the blood is very red, glossy, and it slides out from the rest of the scene, which is flat and dull. The worst thing is that when I wake, I realise it wasn’t a dream at all.

I’m in Blyth. It’s market day and I’m there to shop for Jess. There’s a stall where she buys all her fruit and veg – she knows the bloke who runs it and he always gives her a good deal. It’s mid-morning , with lots of people about. It’s not long before Christmas and everyone’s in the mood when they have to buy, even if the stuff’s crap, otherwise they feel they’re not prepared. A foggy, drizzly day, and cold with it. There’s a raw east wind which cuts into the skin. But it doesn’t draw blood. Not like the scissors I buy in Woolworths. I ask the assistant to take them out of the plastic packet to check they’re sharp. I run my thumb across the blade and there’s a small read line and then tiny, perfectly round red drops like jewels. I fumble with the money when I pay, not because of the cut, which is already healing, but because my hands are freezing.

Burial of Ghosts is a standalone book. It’s not a new book as it was first published in 2003 It’s now available in a new Pan paperback edition, which was published in September 2013.

Note: I see ITV are trailing series four of Vera when the first episode will be an adaptation of Harbour Street, the sixth and latest Vera Stanhope book. I really must read that one soon.