Judith at Reader in the Wilderness hosts this meme – Bookshelf Travelling for Insane Times.  I am enjoying this meme, looking round my actual bookshelves and re-discovering books I’ve read or am looking forward to reading. The idea is to share your bookshelves with other bloggers.

This is really a Friday meme, but once more I’m late writing my post!

For this week’s post I’ve been looking through some of my oldest books.

First is a book from my childhood, The Secret Garden by Frances  Hodgson-Burnett. It is now yellowing and a bit battered, but still in one piece. In the description at the front of the book the editor writes: Girls like it most, and between the ages of nine and fourteen – and, be warned, keep your copy carefully. You will want to go back and read it over and over again. I can’t remember how old I was, but the editor was right – I did read it over and over again.  I’ve wanted a walled garden ever since I read about the secret garden that Mary found at her Uncle’s house, Misselthwaite Manor in Yorkshire. It’s about the magic of nature, that makes plants and people grow and develop, the magic of the power of positive thinking and prayer, of the healing power of the mind, and of laughter and love.

Next a book I read as a teenager – Mist Over Pendle by Robert Neill. Set in rural Lancashire in the early 17th century it tells the story of Margery Whitaker, an orphan who went to live with her relatives on the Lancashire and Yorkshire border. People have died, apparently from belladonna poisoning and two old crones are suspected of witchcraft. Margery and her cousin Roger investigate whether they really were witches. I found it fascinating and it was probably the book that started me off reading historical fiction.

I began doing yoga when I was in my thirties and Yoga by Ernest Wood is one of several books I bought at the time. It’s not just a book about the yoga breathing practices or the yoga postures – and there are no photos demonstrating them – it’s more about the classical background of yoga and its goals – the awakening of the higher spirit, bodily and mental health and the benefits of yoga in daily life. So, there are chapters on the ethics and morality of yoga, yoga and the intellect, yoga and vitality and the basic philosophy of yoga. 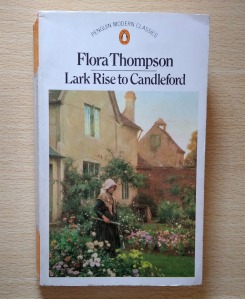 And finally a book I read in my forties. I’d had a really bad case of flu which meant that I couldn’t even lift my head off the pillow, never mind pick up a book! But when  I was recovering I read and loved Flora Thompson’s book Lark Rise to Candleford. It’s a trilogy including in addition to Lark Rise, Over to Candleford and Candleford Green. It’s a record of country life at the end of the 19th century, based on the author’s experiences during childhood and youth. It chronicles May Day celebrations and forgotten children’s games as well as the daily lives of farmworkers and craftsmen, and her friends and relations.