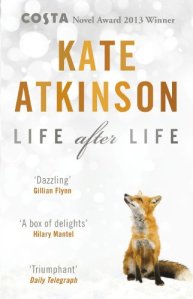 I am delighted to say that I loved Life After Life. I wasn’t at all sure that I would as I began reading it soon after I bought it (in 2013) and didn’t get very far before I decided to put it to one side for a while. A ‘while’ became years – and then at the end of 2016 I read A God in Ruins about Ursula’s brother Teddy, and loved it and decided to try Life After Life again. But, even so it has taken me until this September to get round to reading it. I can’t imagine what my problem with it was in 2013, because this time round once I’d started it I just knew I had to read it and I was immediately engrossed in the story.

Ursula Todd was born on 11 February 1910 at Fox Corner during a wild snowstorm. In the first version she was born before the doctor and the midwife arrived and she died, strangled by the umbilical cord around her neck. But in the second version the doctor had got there in time and saved her life, using a pair of small surgical scissors to snip the cord.

During the book Ursula dies many deaths and there are several different versions that her life takes over the course of the twentieth century – through both World Wars and beyond. Each time as she approaches death she experiences a vague unease, before the darkness falls. As she grows older she experiences different outcomes to the events that lead up to that feeling of unease, and finds that sometimes she can prevent the darkness from falling. By the end of the book I had a complete picture of a life lived to the full. I loved the way she experiences the same circumstances but because one little thing is changed it completely changes the whole sequence of events.

There is a constant thread throughout the book – the Todd family, Ursula’s mother, Sylvie, her father, Hugh, her aunt, Izzie, and her brothers and sisters, plus the family servants and friends. They all play more or less significant roles throughout Ursula’s life. It’s a large cast of characters but I had no difficulty in distinguishing them – they all felt ‘real’, partly I think because Atkinson is so good at depicting family life and relationships.

I would love to know more about several of the characters – Izzie, for one – Hugh’s wild bohemian sister, who Sylvie called a ‘cuckoo’ and Mrs Glover described as a ‘Flibbertigibbet’. Then there is Sylvie herself, who I found quite a mysterious character – in particular one of the chapters describing Ursula’s birth very near the end of the book set my imagination working overtime- what had Sylvie known and how? There is more about Ursula’s youngest brother, Teddy in A God In Ruins and I think I’ll have to re-read it soon to see what further light it throws on all the characters.

In some ways it is a tragic book – particularly the parts set during the war years. They are brilliantly written bringing the full of horror of war into focus; some of the standout scenes  are those in London during the Blitz. And it’s interesting to speculate how different the history of the twentieth century could have been if Hitler had been assassinated in 1930. The whole book is full of ‘what ifs’ – what if this character had behaved differently, what if that had not happened, what if you’d made a different choice of subject to study or a different career, or married a different person?

In fact I think the whole book is excellent, well researched and with such a different structure so well done that it kept me glued to the pages. I wish I’d read it earlier – but it obviously wasn’t the right time for me to read it then.

12 thoughts on “Life After Life by Kate Atkinson”