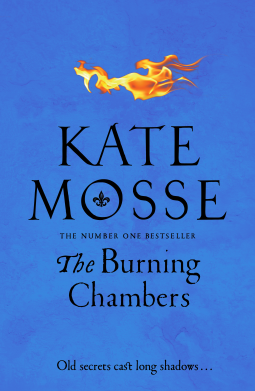 The Burning Chambers is the first in a new trilogy set in Languedoc in the south-west of France. It’s set in 1562 during the French Wars of Religion – Kate Mosse sets out the history of these civil wars that took place between Huguenots (Protestants) and Catholics from 1562 and 1598 and explains that the trilogy is set against the backdrop of 300 years of history from 16th century France to 19th century South Africa.

I found the beginning of this book hard to follow and slow-going with the introduction of several different characters, and I wasn’t entirely clear how they all interacted. Fortunately there is a list of characters at the beginning of the book, but it’s a bit distracting having to keep referring to it. Once I had sorted out who was who I became engrossed in the story. It’s a complicated story of war, conspiracies, love, betrayal, forgery, torture and family secrets.

It’s centred on the Joubert family, Catholics living in Carcassonne and Piet Reydon, one of the Huguenot leaders. Bernard Joubert, a bookseller had been imprisoned accused of being a traitor and a heretic, when he let slip information about a secret will, the importance of which only becomes clear later on. He is traumatised by his experience and withdraws into himself. His oldest daughter Minou receives a message, sealed with a distinctive family crest, it contains just five words: SHE KNOWS THAT YOU LIVE. She doesn’t understand what this means and unable to speak to her father puts it out of her mind for the time being. Piet, meanwhile is on a dangerous mission in Carcassone to further the Huguenot cause and finds his life is in danger from the priest Vidal, formerly his friend, and is helped by Minou and her younger brother, Aimeric to escape.

Bernard suffering from the torture he endured leaves Carcassone and travels to the small village of Puivert, after persuading Minou, who has fallen in love with Piet, to go with Aimeric to Toulouse where the their aunt and uncle live thinking they would be safer there. But Toulouse is being torn apart by the warring factions, putting them all in terrible danger. Alis, their little sister left in Carcassone with a servant and family friend also finds herself in great danger when Blanche de Bruyere, the ruthless Chatelaine of Puivert arrives in search of Minou.

With a large cast of characters, a few stand out, in particular Minou, a resourceful young woman, her aunt, Madame Salvadora Boussay, outwardly a meek woman dominated by her husband but as the story progresses she is shown as a much stronger personality, and then my favourite, clever little Alis, much braver than any of her family realised.

So, having started slowly, The Burning Chambers develops into a fast moving story, with engaging characters, set in a convincing historical background and ending with a dramatic climax as the secrets of the past are finally revealed. The book ends with an epilogue telling of events ten years later and hinting at what may follow in the next book in the trilogy and also in the final book set in South Africa.

Many thanks to Pan Macmillan, Mantle for a review copy via NetGalley.

7 thoughts on “The Burning Chambers by Kate Mosse”