This week’s first paragraph is from Call the Dying by Andrew Taylor, crime fiction set in the 1950,  the seventh in Taylor’s Lydmouth series. 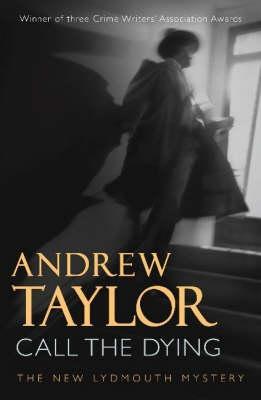 I saw a ghost today. It was very foggy, I know, but I’m sure I wasn’t mistaken. He was coming through the door of Butter’s, and he looked like a ghost because of the fog. But he really was a ghost from a time that’s dead and gone.

I’ve done nothing wrong. Not really. So it’s not fair. It’s as if everyone’s ganging up against me.

Or is it just me? Am I going mad? did I really see him?

I’m afraid. I’m lonely, too. Keep busy that’s the answer. Make my self tired. You don’t have time to feel afraid when you’re deadbeat, you just sleep instead.

I like the thought of sleeping. I can’t remember when I last had an unbroken night.

Love and need make unexpected bedfellows, and both are blind. As the grip of a long hard winter tightens on Lydmouth, a dead woman calls the dying in a seance behind net curtains. Two provincial newspapers are in the throes of a bitter circulation war. A lorry-driver broods, and an office boy loses his heart.

Britain is basking in the warm glow of post-war tranquillity, but in the quiet town of Lydmouth, darker forces are at play. The rats are fed on bread and milk, a gentleman’s yellow kid glove is mislaid on a train, and something disgusting is happening at Mr Prout’s toyshop.

Returning to a town shrouded in intrigue and suspicion, Jill Francis becomes acting editor of the Gazette. Meanwhile, there’s no pleasure left in the life of Detective Chief Inspector Richard Thornhill. Only a corpse, a television set and the promise of trouble to come.

I bought this book a couple of years ago, keen to read it as I’d enjoyed Taylor’s Roth trilogy so much.

9 thoughts on “My Friday Post: Call the Dying by Andrew Taylor”