At the beginning of this month I read Bernard Cornwell’s Fools and Mortals set in 1595 as the Lord Chamberlain’s Men  are rehearsing Shakespeare’s new play, A Midsummer Night’s Dream.  And I remembered another book that I’ve been meaning to read for over 10 years – 1599 A Year in the Life of William Shakespeare by James Shapiro. That was the year the Globe Theatre was built and that Shakespeare wrote Julius Caesar, Henry V, As You Like It and Hamlet. 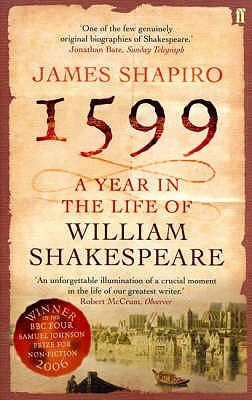 I’m not sure where this book actually begins – there is a Preface, then a Prologue before you get to Chapter 1 on page 27! So here are the opening lines of each.

In 1599 Elizabethans sent off an army to crush an Irish rebellion, weathered an armada threat from Spain, gambled on a fledgling East India Company and waited to see who would succeed their ageing and childless Queen. They also flocked to London’s playhouses, including the newly built Globe.

The weather in London in December 1598 had been frigid – so cold that ten days before New Year the Thames was nearly frozen over at London Bridge. It thawed just before Christmas, and hardy playgoers flocked to the outdoor Rose playhouse in Southwark in record numbers. But the weather turned freezing cold again on St John’s Day, the 27th, and a great snowstorm blanketed London on 28 December.

As the snow fell, a dozen or so armed men gathered in Shoreditch, in London’s northern suburbs.

The armed men then went to another playhouse, the nearby Theatre that had been vacant for two years and proceeded to dismantle the building. They took the frame to a waterfront warehouse near Bridewell Stairs to store it, ready to resurrect it as the Globe.

And at last here are the opening sentences of

Chapter  1 A Battle of Wills

Late in the afternoon of Tuesday 26 December 1598, two days before their fateful rendezvous at the Theatre, the Chamberlain’s men made their way through London’s dark and chilly streets to Whitehall Palace to perform for the Queen. Elizabeth had returned to Whitehall in mid-November in time for her Accession Day celebrations. Whitehall, her only London residence, was also her favourite palace and she spent a quarter of her reign there, especially around Christmas.

The Chamberlain’s Men were at the Palace to play the first night of the Christmas holidays, performing The Second Part of Henry the Fourth.

I think this is a book that will take me quite some time to read – it’s full of detail, not just about Shakespeare, his plays and the theatre, but also about the events of his life and times!

12 thoughts on “First Chapter First Paragraph: 1599: A Year in the Life of William Shakespeare”