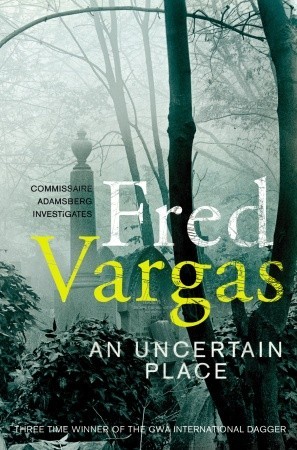 I loved An Uncertain Place, a clever and also a confusing book. It’s the sixth in Fred Vargas’ Commissaire Adamsberg series in which he investigates a macabre murder. I say confusing because I got a bit lost in the middle of the book, and looking back I think it’s because Adamsberg is not your normal detective – he works by intuition and I simply hadn’t followed his train of thought. With a bit of concentration I was back on track and caught up with him.

I say clever because it is such a convoluted plot, with what I thought could be red herrings, but which turned out to be vital clues. I think the blurb on the back cover summarises the story better than I could:

Commissaire Adamsberg leaves Paris for a three-day conference in London. With him are Estalere, a young sergeant, and Commandant Danglard, who is terrified at the idea of travelling beneath the Channel. It is a welcome change of scenery, until a macabre and brutal case comes to the attention of their colleague Radstock from New Scotland Yard.

Just outside the gates of the baroque Highgate cemetery a pile of shoes is found. Not so strange in itself, but the shoes contain severed feet. As Scotland Yard’s investigation begins, Adamsberg and his colleagues return home and are confronted with a massacre in a suburban home. Adamsberg and Danglard are drawn in to a trail of vampires and vampire-hunters that leads them all the way to Serbia, a place where the old certainties no longer apply.

This is one of those books that once I begin reading I don’t want to put down. I had to, of course, and it’s not a book to dash through to the end or you’ll miss so much. Adamsberg is a very likeable detective, although he must be a nightmare to work with, as his colleagues find his methods of working just as bewildering and confusing as I do. But they are used to him and trust his leaps of intuition.

The mystery of who left the shoes outside the gates of Highgate Cemetery is a theme throughout the book:

The smell was ghastly, the scene appalling, and even Adamsberg stiffened, standing back a little behind his English colleague. From the ancient shoes, with their cracked leather and trailing laces, projected decomposed ankles, showing dark flesh and white shinbones which had been cleanly chopped off. The only thing that didn’t match Clyde-Fox’s account was that the feet were not trying to get into the cemetery. They were just there, on the pavement, terrible and provocative, sitting inside their shoes at the historic gateway to Highgate Cemetery. They formed a carefully arranged and unspeakable pile. (page 23)

3 thoughts on “An Uncertain Place by Fred Vargas”