It’s always a bit of a gamble reading a book by an author you’ve never heard of before, but I thought If Ever I Fall by S D Robertson looked as though it would be a book I would like. It’s a story about a family in crisis, struggling to come to terms with a terrible tragedy. It is his second book, due to be published on 9 February 2017. 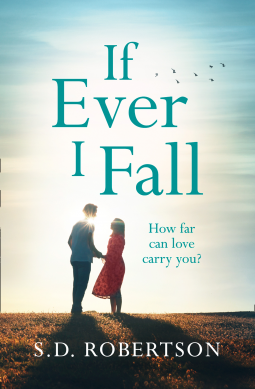 And reading the Prologue it seemed as though I was right. It begins mysteriously as a man surfaces from his dreams only to discover that he doesn’t know who he is. It appears that Miles has rescued him and tells him he had suffered a head trauma. He calls him Jack. But as I read on I became confused and struggled a bit to follow the narrative.

It’s difficult to write about this book without giving away spoilers. The structure of the novel confused me at first because the story moves between three characters’ perspectives – Maria, Dan, her husband and Jack- and between different time periods.

Maria’s side of things is told in letters to Sam moving forwards in time, whereas Dan’s story begins in the present and moves backwards in time, and Jack’s is timeless. At first I had to keep checking the chapter titles to find out what time period I was reading until I got the hang of it. It shouldn’t really have been that difficult as the style of each is different but it did take me a while to get into the story.

Maria’s letters are quite stilted – maybe that’s what they were meant to be as she is struggling to sort out and write her thoughts so that Sam will understand. Her letters are full of grief. But they are long-winded explanations of what she was thinking and feeling and they slowed down the narrative too much for me. She obsessed about her OCD, but maybe I’m being over critical and insensitive here because being obsessive is the essence of the condition after all, but it became quite dull to read. I was more interested in Dan’s story and especially in Jack’s.

It is Jack’s story that captivated me the most and each time the narrative went to Maria or Dan I wanted to get back to Jack to find out what was happening to him – because some very strange things were going on around him. He can’t work out if he can trust Miles who tells him that he is helping him to renovate a house by the sea. But Jack keeps finding that he is in other places, as a fog descends upon him, or he finds himself trapped in a tunnel unable to move, and he sees people who Miles tells him aren’t there. Whereas, Maria’s and Dan’s stories show them dealing with the same events in different ways, culminating in one tremendous tragedy  and growing increasingly apart. All three narratives are full of emotional and psychological tension.

About half way into the book I began to work out the storyline and how the three narratives linked together and was able to settle into enjoying the book, which did work out as I had anticipated.

It’s about what happens to family relationships hit by the most terrible tragedy, how grief affects us in different ways, and the psychological and emotional impact of amnesia and obsessive compulsive disorder. I think if the novel had followed the story in a straight forward chronological order it would not have had as much impact on me. It certainly gave me much to think about as I was reading it and afterwards.

My thanks to Avon Books UK and NetGalley for a review copy.

One thought on “If Ever I Fall by S D Robertson”