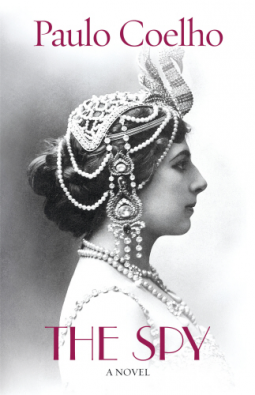 When Mata Hari arrived in Paris she was penniless.

Soon she was feted as the most elegant woman in the city.

A dancer who shocked and delighted audiences; a confidant and courtesan who bewitched the era’s richest and most powerful men.

But as paranoia consumed a country at war, Mata Hari’s lifestyle brought her under suspicion. Until, in 1917 she was arrested in her hotel room on the Champs Elysees and accused of espionage.

Told through Mata’s final letter, THE SPY tells the unforgettable story of a woman who dared to break the conventions of her time, and paid the price.

Before I read this book I didn’t know much about Mata Hari, beyond the facts that she was an exotic dancer and that she was executed as a spy during the First World War, so I was interested to know more.

The Spy is a gripping tale and one I read quickly, fascinated by the story of Mata Hari, whose real name was Margaretha Zella, a name she detested. The book begins with a prologue describing the execution of Mata Hari in Paris on 15 October 1917. It is quite remarkable; she was calm, taking care with dressing herself and with her appearance and choosing to face the firing squad neither bound nor blindfolded.

It continues with her life story told through letters and news clippings and illustrated with photographs. She was accused of being a double agent, but claimed she was innocent and the evidence against her was indeed flimsy. The whole procedure was based on deductions, extrapolations and assumptions. Whatever the truth about her innocence, she comes across as a strong-minded, independent and arrogant woman, who believed she could use her beauty and charm to allure any man to get what she wanted.

I always like to know when I’m reading fictionalised biographies how much is based on fact and what has been fictionalised, so I appreciated the author’s explanatory note at the end of the book. Coelho writes that he had based his novel on facts, but he had created some dialogue, merged certain scenes, changed the order of a few events and left out anything he thought wasn’t relative to the narrative. His opening pages, for example are from a report for the International News Service by Henry G Wales in Paris and dated October 15, 1917 and he has borrowed some verbatim language from the report. He has used various sources such as the British Intelligence Service file on Mata Hari.

Many thanks to NetGalley for a review copy of this book.

7 thoughts on “The Spy by Paulo Coelho”