Today is the last day of September and as I shan’t finish any of the books I’m currently reading today, my total for the month is eight books – all fiction.

I wrote posts about five of them. Three are books from my TBR piles (books I owned before 1 January this year), one is a library book, two are review books and two are books I bought this year:

I  shall write a review of The Black Friar by S G MacLean (RB) later next week.

Here are some brief notes of the other two books:

Extremely Loud and Incredibly Close by Jonathan Safran Foer – I enjoyed this unusual story about a boy whose father is killed in the September 11th attacks on the World Trade Centre. Oskar is is trying to discover the facts about his father’s death and also to solve the mystery of a key he discovers in his father’s closet by attempting to search for which of the 162 million locks in New York it might open.

Oskar is an extremely bright nine-year old, most likely on the Autism Spectrum. The narrative, streams of consciousness in parts, switches between Oskar and his grandparents, touches on the bombing of Dresden during the Second World War where his grandparents were living and on the bombing of Hiroshima. The text is interspersed with what at first appear to be random photos. I thought it was fascinating and moving without being sentimental.

A Prayer for Owen Meany by John Irving – I have mixed feelings about this book, parts of it are brilliant, fascinating and funny, but parts of it are tedious and boring. It is about Owen Meany, a very small boy with a strange voice who believes his life is directed by God, and his friend Johnny Wheelwright. Owen accidentally kills Johnny’s mother during a baseball game, setting in motion most of the rest of the story. Johnny doesn’t know who his father is and the two boys try to discover his identity. One of the main themes of the book is the conflict between faith and doubt.

It begins quite slowly and there were times when I was about to give up reading it, but then it picked up pace and grabbed my attention – such as the scenes where Owen plays the part of Baby Jesus in a church nativity, which is hilarious, and the Ghost of the Future (the Ghost of Christmas Yet to Come)  in a performance of A Christmas Carol. But I got increasingly irritated by the capitalisation of everything Owen said and of the enormous amount of description of everything in the minutest detail – and I normally enjoy descriptive writing! Even so, I just had to read to the end, intrigued to find out what would happen.

My favourite book, the book I enjoyed the most, is The Bottle Factory Outing by Beryl Bainbridge. 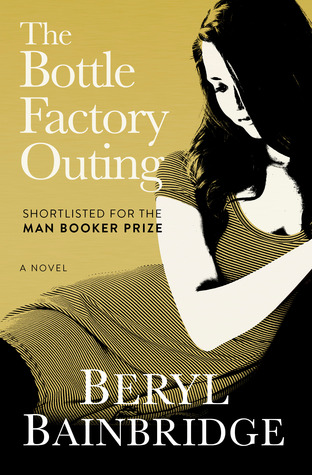