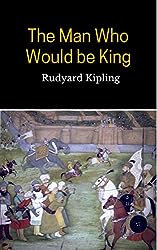 For me the book chosen for the current Classics Club Spin is The Man Who Would Be King by Rudyard Kipling. It’s a novella, just 60 pages, which first appeared in The Phantom Rickshaw and other Eerie Tales, published in 1888.

Set in India and narrated by a journalist this is a story of two ruffianly-looking adventurers, wanderers and vagabonds, Daniel Dravot and Peachey Carnehan, who announce that they are off to Kafiristan in the mountains of Afghanistan to make themselves Kings. They tell the journalist that when they have got their kingdom ‘in going order’ they will let him know and that he can then come and help them govern it.

But some two years later, on a hot summer’s night, what was left of Carnehan crept into the journalist’s office,

He was bent into a circle, his head was sunk between his shoulders, and he moved his feet one over the other like a bear. I could hardly see whether he walked or crawled- this rag-wrapped, whining cripple who addressed me by name, crying that he was come back. (page 24)

And he had a sorry tale to tell.

I was a bit disappointed with it, mainly because for a novella it took such a long time to set the scene and the opening section was confusing, with references I didn’t understand. After the slow beginning the story picks up when it gets to relating what happened to Dravot and Carnehan. The Kipling Society website (where you can read the story, which is also free on Amazon) has some notes that helped me understand more – Masonic, Biblical and other references and details about the places and people mentioned.

The Kipling Society also gives details of the background to the story and some critical responses to it. Overall the responses are good – that it is a memorable, fantastic tale, some believing it to be a masterpiece, but Kingley Amis stated it was a ‘grossly overrated long tale‘. I was also interested that Edmund Wilson is quoted as stating that the story is “…surely a parable of what might happen to the English if they should forfeit their moral authority.”[Edmund Wilson ‘The Kipling that Nobody Read’, in Kipling’s Mind and Art ed. Andrew Rutherford, Oliver & Boyd, 1964.]

There was a film adaptation in 1975, starring Sean Connery as Dravot and Michael Caine as Carnehan with Christopher Plummer as Kipling, which according to some is much better than the story itself.

Rudyard Kipling was born in Bombay in 1865 and lived there until he was five when he was taken to live in England, returning to India in 1882, where he worked as a journalist. As well as short stories he also wrote poems, including If, and novels, and was awarded the Nobel Prize in Literature in 1907.

My copy is an e-book, which I’ve had for several years, so it counts towards my Mount TBR Reading Challenge.