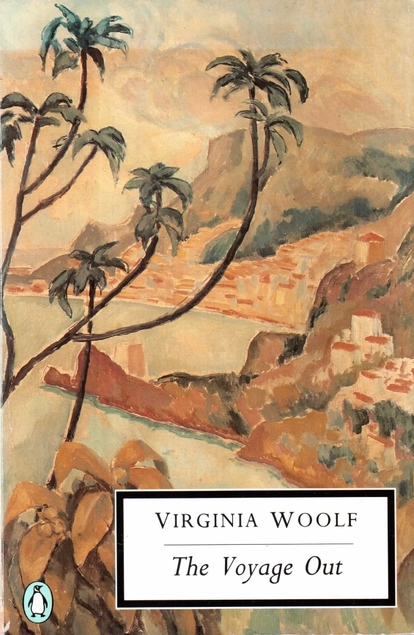 The idea for March and April in HeavenAli’s Virginia Woolf Read-a-long was to read one or more of: The Voyage Out, Night and Day (Virginia Woolf’s first and second novels) or Between the Acts which was her final novel. This was just the reminder I needed to get The Voyage Out down from my bookshelves where it’s been sitting unread for years.

This post is far too long, but one reason for writing this blog is to record what I think of a book and what I want to remember about it – this post only touches on that even at this length! There is so much more to be said about it.

I’ve not written much about the plot. This is the Synopsis from the back cover of my copy (published by Penguin in 1992):

The Voyage Out opens with a party of English people aboard the Euphrosyne, bound for South America. Among them is Rachel Vinrace, a young girl, innocent and wholly ignorant of the world of politics and society, books, sex, love and marriage. She is a free spirit half-caught, momentarily and passionately, by Terence Hewet, an aspiring writer met in Santa Marina. But their engagement is to end abruptly, and tragically.

Background to the novel:

In 1913 Virginia Woolf (1882 – 1941) had been suffering ill health for some time – depression,  nervous breakdowns and anorexia – when her half-brother George Duckworth published The Voyage Out in 1915. She had started writing it years earlier and had revised it several times before finalising it in 1912 and 1913.

I don’t like to read the introduction of a book first as often it gives away elements of the plot that I’d rather not know in advance, but I think that this paragraph does help to explain much that I wondered about as I read the book. But if you don’t want to know just skip this next paragraph.

In the introduction to the book, Jane Wheare wrote:

A knowledge of Woolf’s life will certainly deepen our response to all her work. Amongst many other details from the young Virginia Woolf’s experience that appear in fictional form in The Voyage Out one can single out her bouts of mental illness, on which she drew for the description of Rachel’s  fever; the voyage which she made to Spain and Portugal with her brother Adrian in the spring of 1905, her sister Vanessa’s illness and her brother Thoby’s death from typhoid in 1906; and her interest on feminism. (page xiii)

I finished reading it a short time ago, but have found it difficult to write about it. It is an intriguing book, beginning in a leisurely fashion as Mr and Mrs Ambrose (Rachel’s aunt and uncle) stroll down the Strand to the Embankment on their way to board the ship, Euphrosyne  and yet there is tension in the air and Mrs Ambrose has tears rolling down her face. This tension and sense of underlying trouble and anxiety continues throughout the book.

It begins mid-stream, as it were, with little background at first about the characters or about why the people are on board the Euphrosyne. It is only when the ship arrives at Santa Marina (a fictional place) that Woolf explains why they are going there; and their relationships are slowly revealed through their conversations and actions. The Dalloways make a brief appearance in the book when they spend a short time aboard the ship, leaving before the ship reaches Santa Marina.

I was surprised at just how naive Rachel is for a young woman of 24, even though she had been brought up by her two aunts. Helen Ambrose is shocked, writing about her niece in a letter to a friend, criticising the current methods of education:

This girl, though twenty-four, had never heard that men desired women, and until I explained it did not know how children were born. (page 59)

In some ways this is a coming-of -age novel and Rachel’s actions and reactions are the focus of the book. In it Woolf explores the nature of Rachel’s mind, her obsessions and beliefs and through it her own thoughts about depression, suicide, death and the meaning of life. It’s a huge subject, at times celebrating the wonder and beauty of life and at other times plunging down into the hopelessness and despair that some of the characters experience.

I knew from the book’s description that it ends in tragedy and I wondered as I read what form it would take. But even so, I was taken aback at the desperate sadness of it – it was draining!

On religion: Mrs Dalloway is talking to Helen Ambrose – “I always think religion’s like collecting beetles,” she said, summing up the discussion as she went up the stairs with Helen. “One person has a passion for black beetles; another hasn’t; it’s no good arguing about it.” (Page 33)

On politics: Mr Dalloway (a politician) talking about a suffragette sitting outside the house (House of Commons): “My good creature, you’re only in the way where you are. You’re hindering me, and you’re doing no good to yourself.” And later in the conversation he says: “Nobody can condemn the utter folly and futility of such behaviour more than I do: and as for the whole agitation, well! may I be in my grave before a woman has a right to vote in England! That’s all I say.” (page 24)

Mr Ambrose replies: “I don’t care a fig one way or t’other. If any creature is so deluded as to think that a vote does him or her any good, let him have it. He’ll soon learn better.”

On women:  St. John Hirst speaking, “Just consider: it’s the beginning of the twentieth century, and until a few years ago no woman had ever come out by herself and said things at all.” …

It’s the man’s view that’s represented, you see. Think of a railway train: fifteen carriages for men who want to smoke. Doesn’t it make your blood boil? If I were a woman I’d blow someone’s brains out. Don’t you laugh at us a great deal? Don’t you think it’s all humbug? (page 139)

There is much more I could quote on women’s suffrage in this book.

On England in June – an example of Woolf’s descriptive writing: The thought of England was delightful, for they would see the old things freshly; it would be England in June, and there would be June nights in the country; and the nightingales singing in the lanes, into which they would steal when the room grew hot; and there would be English meadows gleaming with water and set with stolid cows, and clouds dipping low and trailing across the green hills.

and comparing it with South America:

… “Lord, how good it is to think of lanes, muddy lanes, with brambles and nettle, you know, and real grass fields, and farmyards with pigs and cows, and men walking beside carts with pitchforks – there’s nothing to compare with that here – look at the stony red earth, and the bright blue sea, and the glaring white houses – how tired one gets of it! And the air without a stain or a wrinkle. I’d give anything for a sea mist.” (pages 138-9)

A note about the cover

I think the cover is striking. It’s from a painting by Roger Fry – Roquebrune and Monte Carlo from Palm Beach, in the City of Glasgow Art Gallery.

Roger Eliot Fry (14 December 1866 ‘“ 9 September 1934) was an English painter and critic, and a member of the Bloomsbury Group. Establishing his reputation as a scholar of the Old Masters, he became an advocate of more recent developments in French painting, to which he gave the name Post-Impressionism. He was the first figure to raise public awareness of modern art in Britain, and emphasised the formal properties of paintings over the “associated ideas” conjured in the viewer by their representational content. He was described by the art historian Kenneth Clark as “incomparably the greatest influence on taste since Ruskin … In so far as taste can be changed by one man, it was changed by Roger Fry”.[1] The taste Fry influenced was primarily that of theAnglophone world, and his success lay largely in alerting an educated public to a compelling version of recent artistic developments of the Parisian avant-garde. (from wikipedia)

Fry, who for a while had an affair with Vanessa Bell, Virginia’s sister, was a friend of Virginia’s. She wrote three books subtitled ‘A Biography‘ – her biography of Roger Fry is one of them, first published in 1940.

Needless to say – I enjoyed this book and it has encouraged me to read more of Virginia Woolf’s books (I’ve already read Mrs Dalloway, To the Lighthouse and Flush, all before I began my blog, and Death of a Moth and Other Essays – see also this post.)

5 thoughts on “The Voyage Out by Virginia Woolf”