I was pleased when the Classics Club Spin number came up as 8, because for me that was The Mill on the Floss, a book I’ve had for years, so it was time I read it. 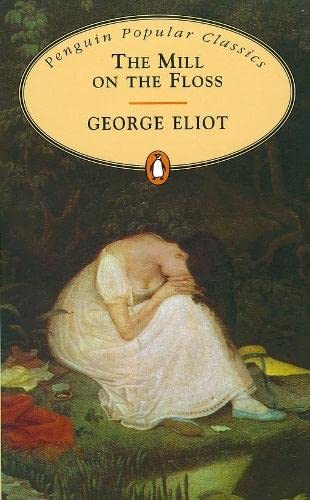 I think one of the reasons I hadn’t read it is the size of the font – it’s small. But then I realised that there is a free e-book, so I read it on my Kindle as I could increase the font size.

Description (from my paperback copy of the Penguin Popular Classics 1994 edition, shown above):

George Eliot drew on her own anguished childhood when she depicted the stormy relationship between Maggie and Tom Tulliver. Maggie’s often tormented battle to do her duty and belong on the one hand, and to be  herself, wild and natural, on the other, propels her from one crisis to another. As the Tulliver fortunes decline and fall, the rift between Maggie and her family becomes almost irreconcilable. But Maggie’s biggest mistake of all is to fall in love with Stephen Guest who is engaged to another woman.

Both a sharp and observant picture of English rural life and a profoundly convincing analysis of a woman’s psychology, The Mill on the Floss is a novel that tackles the complexities of morality versus desire.

The Mill on the Floss was first published in 1860. The story begins in the late 1820s, when Maggie, who is ‘big for her age, gone nine‘ and her brother, Tom aged about twelve are living at Dorlcote Mill on the banks of the river Floss near the town of St Oggs. Their father is anxious that Tom should have a good education so that he can go into business – he does not want him to be a miller. But it is Maggie who is the keen reader, enjoying books like The History of the Devil by Daniel Defoe, Aesop’s Fables and the Pilgrim’s Progress.

I enjoyed parts of the book more than other parts. The first part of this book, covering Maggie and Tom’s childhood for example is fascinating and a study of early 19th century rural life and education. Tom goes away from home to study under a tutor, Mr Stelling and meets Philip Wakem, whose father is a lawyer, Mr Tulliver’s opponent in a lawsuit. Maggie and Tom’s relationship is difficult, although she professes she ‘loves him better than anyone else in the world’, even when he rebukes her. Meanwhile Maggie becomes more friendly with Philip than Tom and her family like.

There are some lovely scenes, for example Maggie’s escapade when she leaves home to live with the gypsies. And I liked all the scenes with Mrs Tulliver’s sisters, who look down on her for marrying a miller and criticise Maggie’s appearance and behaviour, for Maggie is full of high spirits and energy. The sisters also provide comic relief, at times being miserly and self-centred, with a strong sense of their own importance. But things go from bad to worse for the Tullivers, when Mr Tulliver loses the lawsuit and eventually loses the mill.

In other places, between scenes there are long, rambling passages, that I found too wordy and philosophical and I waited impatiently to get back to the story. But overall I liked the book, more than I liked Adam Bede, but not as much as I remember liking Middlemarch, which I read long before I began this blog.

The Mill on the Floss is an epic novel encompassing various themes such as love, marriage, family loyalty, the social conventions of the times, and the struggle to survive. Feminism, education, and the role of women in society are to the fore, as Maggie is torn between two men who love her and is judged harshly for her behaviour.

It is a character driven plot; the river Floss plays a major part in the story, running through a wide plain, hurrying on to the sea, laden with ships. It’s a noisy place with Dorlcote Mill is on its banks near a stone bridge and the rush of the water is deafening, along with the ‘thunder of the huge covered wagon coming home with sacks of grain‘.

And it is the Floss that provides the huge climax which took me by surprise. It’s a dramatic ending and yet I found it rather unsatisfactory, not sure that I could believe what I had read, and shocked by such a sad ending. Looking back after I finished the book I realised that it had been foreshadowed almost from the start and I had missed it.

4 thoughts on “The Mill on the Floss by George Eliot”