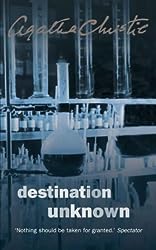 I had no great expectations when I began reading Agatha Christie’s Destination Unknown (first published in 1954) because I’ve not been keen on her stand-alone international intrigue/spy mysteries. But I thought it started very well and I was soon drawn into the story.

It’s the early 1950s and a number of scientists have disappeared, amongst them is Thomas Betterton, a brilliant nuclear scientist, who had discovered ZE Fission. The British Secret Service suspect that he and the other missing scientists have gone beyond the Iron Curtain, either kidnapped, or tempted by money or by the dream of an ideal world, working for the good of humanity. His wife, Olive, has no idea where he is, but sets off for Morocco, ostensibly on medical advice for a complete rest. However, the plane crashes and she is killed before she gets to her destination.

Hilary Craven, whose abundant red hair is similar to Olive’s, is intent on taking her own life, but she is recruited by Jessop, a British Secret Service Agent who persuades her that if she wants to kill herself she could help her country at the same time by impersonating Olive and thus trace Betterton. In doing so it leads her to a secret scientific complex hidden in the High Atlas mountains and a terrifying discovery.

It went over the top with a string of disasters, involving a faked air disaster, radio-active pearls, a leper colony, and secret laboratories all part of a vast organisation masterminded by a wealthy and powerful fanatic. And added to the international intrigue there is also a murder which is only revealed right at the end of the book. If the plot is bizarre and rather weak, and some of the characters are stereotypes, Hilary’s character is more convincing. And as in her other spy thrillers, Agatha Christie uses it as a vehicle for her own concerns about the state of the post-war world, decrying what she saw as the attempt to impose a world order and discipline, where individuality is suppressed. Hilary thinks she:

would rather have a world of kindly, faulty human beings, than a world of superior robots who’ve said goodbye to pity and understanding and sympathy. (page 102)

It’s a dangerous world where

Once you have got into that state of mind where the taking of human lives no longer counts, then if it is simpler to put a little explosive package under a seat in a plane than to wait about at the corner on a dark night and stick a knife in someone, then the package will be left and the fact that six other people will die also is not even considered. (pages 143-144)

I am nearing the end of reading Agatha Christie’s full length novels and now have just 2 left to read. Although Destination Unknown is not one of my favourites I did enjoy reading it – it moves quickly and kept me interested in its twists and turns. There’s a lot going on and it’s not easy to know who is telling the truth and who to trust.

The edition of Destination Unknown that I read has this cover, fulfilling the cigarette/pipe category on the Golden Age Vintage Mystery Hunt card, as well as the Mount TBR Reading Challenge: