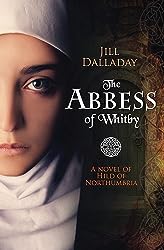 The Abbess of Whitby is subtitled A Novel of Hild of Northumbria. As Jill Dalloway explains in her Author’s Note at the end of the book what we know about Hild (St Hilda) comes from the Jarrow monk Bede’s  A History of the English Church and People written 40 years after her death. He gave no information about her between the ages of 13 and 33, so Jill Dalloway has based her fictional account of her life up to the age of 33 on the works of various modern scholars, assuming that like other royal girls of the time she was married for dynastic or political purposes. The major characters are historical, with a few exceptions and Hild’s husband and son are fictional. Hild was born in 614 and died in 680.

Knowing very little about the historical background to the story I found this a fascinating book, but could not have followed it very easily without the list of characters, the family tree of the royal families of Northumbria and the maps showing the Peoples of 7th Century Britain and of Hild’s Northumbria. I was surprised by how much people travelled in the 7th century. It spurred me on to find out more and I am now reading The King in the North: the Life and Times of Oswald of Northumbria by Max Adams. I would also like to read Edwin: High King of Britain and Oswald: Return of the King both by Edoardo Albert.

About two thirds of the book covers Hild’s early life, from the time she was chosen to lead the handmaidens of the fertility goddess  Eostre. It’s a time of transition as people are gradually being converted to Christianity, although at first it appears to be a matter of politics rather than of faith. Her marriage to Cerdic of the Goddodin tribe took her to Din Edin (Edinburgh). When home and family are lost in Oswy’s sack of Edinburgh, she finds herself in enemy hands, but meets the charismatic Aidan (St Aidan of Lindisfarne). The final part of the book covers her life as she helped establish various chapels and finally settled in Whitby as the Abbess there, involved in resolving the Easter dispute at the Synod of Whitby in 664. This settled that the calculations to establish the date of Easter would be according to the customs of Rome, rather than the Celtic customs practised by Irish monks at Iona and also to observe the monastic tonsure.

For me the first two thirds  of the book, showing the disputes between the separate kingdoms in Britain in the 7th century, the  transition from pagan to Christian beliefs and the harsh conditions and plague people had to endure, came to life more successfully than the later chapters.

I received this book for review from the publishers via LibraryThing’s Early Reviewers Program.

Jill Dalloway is a classicist, historian and former head teacher who pioneered the Cambridge Latin Course. She lives in Whitby.

3 thoughts on “The Abbess of Whitby by Jill Dalladay”