This was originally Cleo’s idea (Cleopatra Loves Books). It’s to look back over your reviews of the past five years and pick out your favourite books for each month from 2011 ‘“ 2015. I like it so much it inspired me to do the same .

I really enjoy looking back over the books I’ve loved reading. These are some of my favourite books for each August from 2011 to 2015 (click on the titles/covers to see my original reviews). 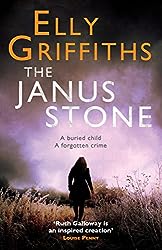 The Janus Stone by Elly Griffiths – this is the second in the Ruth Galloway investigation series. Ruth is a forensic archaeologist. In this book she is called in to investigate when builders, demolishing a large old house in Norwich, uncover the skeleton of a child ‘“ minus the skull ‘“ beneath a doorway. Is it some ritual sacrifice of just plain straightforward murder? Ruth is pregnant, but she’s not sure she wants the father to know.

I like the mix of archaeology, mystery and crime fiction in Elly Griffiths’s books. This one has a double dose, with mythology and Catholicism running through the narrative as well as the police procedures.  Ruth is an interesting character, not your usual detective, she’s overweight, self-reliant but also feisty and tough. She has to be with everything that’s thrown at her and as her investigations lead her into great danger.

The Girl on the Stairs by Louise Welsh is a dark, psychological thriller, full of atmosphere and claustrophobic tension. I really enjoyed it.  It’s a book that once I started reading it I just had to finish it. It’s full of suspense and increasing tension as Jane moves to an apartment in Berlin to join her partner, Petra. Everything is new to her, she only speaks a little German, she doesn’t know the area and has no friends there. And she’s pregnant.

For most of the time Jane is alone in the flat and her sense of isolation grows. She hears their neighbour Dr Mann and his daughter Anna ‘“ the girl on the stairs arguing – and fears Dr Mann is abusing Anna. She ventures out at 3.00am one dark morning drawn by a flickering light in the derelict house at the back, worried that Anna was hiding in there. And as more secrets are revealed I began to wonder just how paranoid Jane was and how much was down to her imagination. Are Jane’s fears justified or is she delusional?

The Birthday Boys by Beryl Bainbridge – an absolutely fascinating novel about Captain Scott’s last Antarctic Expedition. It gets inside each man’s mind, it seemed to me, vividly describing the events as they progressed to the South Pole and the terrible conditions they had to endure. Beryl Bainbridge’s imagination and research combined make this a dramatic heroic story and an emotional roller-coaster set in the beautiful but deadly dangerous frozen landscape of the Antarctic.

At times I had to remind myself that I was reading a novel, but then again there were passages where I had to remind myself that these events really did take place as they seemed so fantastical. Beryl Bainbridge has written a most remarkable book, full of facts seamlessly woven into the narrative, and full of emotion and feeling. It was not only my favourite book of the month but also one of the best books I read in 2013.

All Change by Elizabeth Jane Howard, the  fifth book in her Cazalet Chronicles. I’d read the first four books years ago and loved them, so I was keen to read this last one. It’s the story of the Cazalet family, a very large family by the time of this novel ‘“ 1956 ‘“ 1958, a lovely warm, old fashioned family saga, with both happy and sad events as the Cazalets move forward, and not successfully for all of them, in post-war England. It was a great treat!

This August it was extremely difficult to choose which book I’ve enjoyed the most – see this post. It didn’t help that I gave three books five stars on Goodreads and two more would have been 4.5 if half stars were allowed on Goodreads. The three are all different genres so that made it practically impossible to choose one. In the end and for this post I’m highlighting: 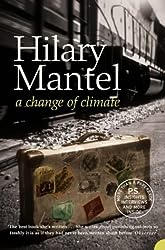 A Change of Climate by Hilary Mantel –  one of Hilary Mantel’s early books, first published in 1994 and  described on the back cover as ‘˜a literary family saga’ and ‘˜a first rate thriller’. It’s a book with an ‘enormous destructive secret‘ at its heart.  A book about family, trust, disillusionment and tragedy, about bereavement and loss of faith. A great book on all counts, characters and locations beautifully described and a well constructed and convincing plot, powerful and challenging on several levels.