Agatha Christie had visited the Middle East in 1929 travelling on the Orient Express to Istanbul and then on to Damascus and Baghdad. She visited the excavations at Ur and returned there the following spring where she met archaeologist Max Mallowan – by the end of the summer they had decided to marry, which they did on 11 September 1930. 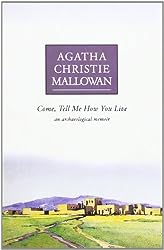 Come Tell Me How You Live: an archaeological memoir is her answer to her friends’ questions about what life was like when she accompanied Max on his excavations in Syria and Iraq in the 1930s.

She began writing it before the Second World War and then laid it aside. After four years of the war she picked it up again, using her notes and diaries to complete this memoir, writing about her life with  Max Mallowan and his team excavating the ancient sites at Chagar Bazar, Tell Brak and other sites in the Habur and Jaghjagha region in what was then north western Syria. This map shows the area they were working in:

… not a task, but a labour of love. Not an escape to something that was, but the bringing into the hard work and sorrow of today of something imperishable that one not only had but still has!

For I love that fertile country and its simple people, who know how to laugh and how to enjoy life, who are idle and gay, and who have dignity, good manners, and a great sense of humour, and to whom death is not terrible.

Inshallah, I shall go there again, and the things that I love shall not have perished from this earth.

With regard to her statement about death earlier in the book Agatha Christie had explained the difference between the Western and Oriental attitudes to life and death:

Accustomed as we are to our Western ideas of the importance of life, it is difficult to adjust our thoughts to a different scale of values. And yet to the Oriental mind it is simple enough. Death is bound to come – it is as inevitable as birth; whether it comes early or late is entirely at the will of Allah. And that belief, that acquiescence, does away with what has become the curse of our modern day world – anxiety. (page 96)

The emphasis in the book is on the everyday life on a dig and Agatha took an active part, helping to catalogue, label and clean the items they found as well as taking photographs and developing them. She also found time to spend on writing her books. So, although she gives a detailed account of how they worked, how they employed workmen for the excavations and servants who looked after Max and his team of archaeologists, there is not much about what they found.

Although she described the local people in her Epilogue as people, who know how to laugh and how to enjoy life, who are idle and gay, and who have dignity, good manners, and a great sense of humour, she also recorded their disputes:

Quarrelling is, in any case, almost continuous. All our workmen have hot tempers, and all carry with them the means of expressing themselves – large knives, bludgeons, and a kind of mace or knobkerry. Heads are cut open, and furious figures are entangled with each other in fierce struggles … page 86

And she also recorded this chilling statement:

We come to the question of religions generally – a very vexed question in this particular part of the world, for Syria is full of fiercely fanatical sects of all kinds, all willing to cut each other’s throats for the good cause! (page 166)

How sad and horrified she would be if she could see Syria today, but in the light of the extract above I don’t think she would have been too surprised! And sadly the places she loved are no longer the same. Here is her description of the shrine Sheikh ‘Ada near Mosul

There  can be, I think, no spot in the world so beautiful  or so peaceful. You wind far up into the hills through oak trees and pomegranites (sic), following a mountain stream. The air is fresh and clear and pure. …

And then suddenly, you come to the white spires of the Shrine. All is calm and gentle and peaceful there. Gentle-faced custodians bring you refreshments and you sit in perfect peace, sipping tea. (page 109)

Compare that with the description in The Guardian last August of the area as ‘hell on earth‘.

This book is written with love and humour – for example Agatha’s description of buying clothes for her visit to Syria because her last year’s summer clothes  are Shrunk, Faded and Peculiar – and too tight everywhere.  In the Foreword she stated that it is a book full of everyday doings and happenings with ‘no beautiful descriptions of scenery, no treating of economic problems, no racial reflections, no history.‘ I think she was under estimating her writing, because this little book has all that and more. I loved it.

9 thoughts on “Come, Tell Me How You Live by Agatha Christie Mallowan”