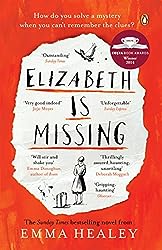 The events in that unfold in Emma Healey’s debut novel, Elizabeth is Missing are seen through Maud’s eyes. But Maud is an unreliable narrator – she can’t help it though as she has dementia.

Emma Healey’s depiction of dementia is convincing showing the confusion and bewilderment that Maud must have felt. It’s heart-rending, as she knows that Elizabeth, her friend, is missing, but doesn’t know where she is and no one seems to be listening to her when she talks about her – her own daughter and Elizabeth’s son just don’t answer her questions. And she asks them over and over again. As Maud continues her search for Elizabeth, she also recalls the search for her sister, Sukey, who disappeared in 1946.

It is not a book that I can say I ‘enjoyed’, even though it’s well written and with convincing characters. I thought it was over long and maybe would have been better as a novella. Inevitably, because the narrator has dementia there is much repetition – too much for me. I was disappointed with the plot too, because the ending became predictable quite early on in the book. Overall then a depressing book.

2 thoughts on “Elizabeth is Missing by Emma Healey”