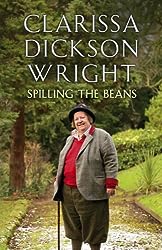 14 thoughts on “Spilling the Beans by Clarissa Dickson Wright”