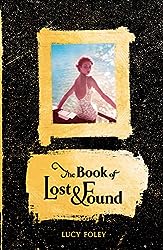 It’s so good to start 2015 reading a book I really enjoyed. It’s The Book of Lost and Found by Lucy Foley – due to be published later this month. I received my copy courtesy of Lovereading for review.

Summary from inside the front cover:

In many ways, my life has been rather like a record of the lost and found. Perhaps all lives are like that.

The paths of Tom and Alice collide against a haze of youthful, carefree exuberance. And so begins a love story that finds its feet by a lake one silvery moonlit evening . . .

It’s when there were no happy endings
PARIS, 1939

Alice is living in the City of Light, but the pain of the last decade has already left its mark. There’s a shadow creeping across Europe when she and Thomas Stafford ‘“ now a world famous artist ‘“ find each other once more . . .

It’s when the story begins
LONDON, 1986
Bequeathed an old portrait from her grandmother, Kate Darling uncovers a legacy that takes her to Corsica, Paris and beyond. And as the secrets of time fall away, a love story as epic as it is life-changing slowly reveals itself . . .

Once I started reading it I didn’t want to stop; Lucy Foley is a great storyteller – it’s hard to believe that this is her first novel! It’s the story of Tom and Alice beginning in 1928 in Hertfordshire and moving backwards and forwards in time and place to 1986, from Paris, to London, Corsica and New York. It all revolves around Kate, whose mother, June, had recently died in a plane crash. When Kate is given an old line drawing in pen and ink, dated 1929, of a young woman, she initially thinks it is of June, but realises that it can’t be – the date is too early and the clothes and hair are all wrong. Thus the search for the woman in the drawing and the artist begins.

There is so much I loved in this book – the characters, the settings and the time periods, against the backdrop of years before, during and after the Second World War. It’s a love story, of course, as well as a story of loss, discovery and grief as the decisions we make impact not just on our own lives but on those of others too.

It is a beautiful book and one that I’d like to re-read one day – I’m sure that I would find things in it I missed this time in my eagerness to find out what happened next.

Lucy Foley studied English Literature at Durham and UCL universities. She now writes full-time, having worked for several years as a fiction editor in the publishing industry. She is now working on her next novel – I hope it’s not too long coming!