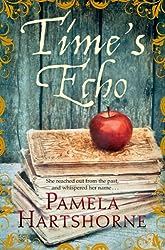 As I wrote in a First Chapter post  Time’s Echo mixes time as Grace Trewe is drawn into Hawise Aske’s life, four and a half centuries earlier in York, 1577. I saw this book in the library and although I hadn’t heard of Pamela Hartshorne I thought the title was interesting, and from the description on the back cover and the opening paragraphs, I thought it was worth borrowing.

It’s a good choice for Carl’s R.I.P. IX challenge, a time-slip story with an element of mystery and suspense in both time periods. Grace is staying in York to sort out the sale of her late godmother’s house when she experiences unnerving episodes in which she appears to be reliving the traumatic events in Hawise’s life beginning in 1577.  Grace likes to travel and although she survived the Boxing Day tsunami she is suppressing her memories of what happened.

I think the suspense is somewhat diluted because right from the opening chapter it’s revealed that Hawise was drowned on All Hallows’ Eve, with her thumb tied to her toe – ie as a witch. But as Grace’s episodes continue she learns what happened in Hawise’s life to bring her to her dramatic death and this is interwoven with events in Grace’s life. It gets to the point where she dreads slipping out of current time into not only Hawise’s past but also into her own as what happened to her in the tsunami breaks through her mind.

What does add to the suspense is the unpredictability of the time-slips and the sense of malice and evil. So much so that the sceptic in me was unable to decide whether this was a question of whether Grace was suffering from post-traumatic stress disorder or was she really being “possessed” by Hawise, as she believed, feeling Hawise clamouring to be let into her mind. I found the historical sections more interesting than the modern story, which I think often happens when I read time-slip stories.

Pamela Hartshorne explains how she came to write this book in the Author’s Note at the end of the book. It grew out of her research on the wardmote-court returns of early modern York. These records dealt primarily with nuisances, things that affected the quality of life for the neighbourhood – such as noisy neighbours, blocked sewers. potholed streets etc (I note that local life hasn’t changed much over the centuries!). Some of the minor characters were real people, but this book is a work of fiction and Hartshorne is not intending this to be an accurate historical account, although she has tried to make it as convincing and as authentic as she could – I think she succeeded.

I thought the book was rather drawn out in parts, slowing the story down a bit too much for my liking. But, I like the fact that the book has a factual background, even though there are some liberties with the evidence – eg there was no plague in York in the 1570s or 1580s as featured in the book. So, on the whole I enjoyed Time’s Echo primarily because of its historical elements and I’ll look out for more books by Pamela Hartshorne. I see from her website that she has just published another time-slip book, The Memory of Midnight.