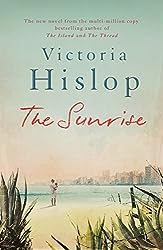 I love historical fiction – books that take me away to another time and place. I think one definition of historical fiction is that it should be written about 50 years after the events it describes and so The Sunrise by Victoria Hislop just falls short of that, set 40+ years ago in Cyprus, but I think it would be pedantic to say it’s not ‘historical fiction’.

Forty years ago Famagusta, on the east coast of Cyprus was one of the island’s most visited and most glamorous tourist resorts with its beautiful coastline and its luxury hotels and apartments in the modern district, now known as Varosha. The medieval walled city to the north of the beach resort was a historian’s dream, with its Byzantine churches, treasures and14th century cathedral. Then in 1974, following a Greek military coup, Cyprus was split in two as Turkish forces invaded the northern part of the island to protect the minority Turkish Cypriots. The population of Famagusta fled and the city was sealed off with barbed wire, leaving it a ghost town.

The Sunrise begins in 1972 before the war erupted. Everything is looking good – on the surface – the tourist trade in Famagusta is booming.

‘It was one of the world’s finest resorts, purpose-built for pleasure, with little in its conception that did not have the comfort of the holidaymaker in mind. The tall buildings that hugged the coastline mostly comprised hotels with smart cafes and expensive shops beneath them. They were modern, sophisticated and reminiscent of Monaco and Cannes, and existed for leisure and pleasure, for a new international jet set ready to be seduced by the island’s charms.’

Hotel owner Savvas Papacosta is aiming to build up a chain of international hotels as recognisable as the Hilton chain. He and his beautiful wife, Aphroditi, have just opened the island’s largest and most luxurious hotel in Famagusta, unmatched by any other in the resort, offering better facilities and entertainment – The Sunrise.

Cyprus was like a vine leaf that looked opaque and green in the hand but held up to the light was lined with veins. The threat of violence coursed invisibly through the island, and while its sunny, sensual image continued to attract visitors, conspiracies were being hatched and whispers clandestinely exchanged behind closed doors.

The first part of the book sets the scene and introduces the main characters against this prosperous but tense atmosphere. This part began really well focussing on the Papacostas and their hotels. But I felt it was rather too long, with so much emphasis on the wealth and prosperity of the owners and their guests. There is so much description of clothes, jewellery and their wealthy lifestyle that I began to tire of it, but I can see why the glamour and lavish lifestyle was emphasised as it provides such a contrast to the deprivations and horrors that came later.

The second part of the book details what happens after Famagusta was isolated, following the lives of the Papacostas and of two families who were employed by the Pappacostas – the Georgious (Greek Cypriots) and the Ozkans (Turkish Cypriots). These two families remain in the city in secret, living in fear for their lives, scouring the streets for food and hiding from the Turkish soldiers.

The tension between the characters is maintained throughout the book and they are well-drawn, so much so that I found myself being irritated by some of their actions – in particular I thought that Aphroditi’s behaviour was so predictable and a little naïve. The story is told through the different characters’ perspective, which gives a rounded view of the events as they unfold and also means that the gory atrocities are reported at a distance rather than seeing them in close-up.

Overall, despite my feelings about the first part of the book, I liked The Sunrise very much – a story of human tragedy in the face of war. It’s a novel about love, friendship and war, the love between parents and their children, and the relationships between men and women. It’s about the struggle for power, about greed, betrayal and deceit. It’s about religion and nationality and the conflict these can cause. Above all it’s about the effect war has on individuals, in particular the brutality and the horrors it engenders.

It is very readable, but I didn’t find it too quick or too easy to read. Victoria Hislop has certainly done her research. I’ve visited the Greek part of Cyprus several times and was aware of the history of the conflict between the north and south of the island, but not in such detail. Victoria Hislop has filled in that detail very well, having visited Cyprus since 1978. Over the last two years she has been there regularly to research this book, although she not been allowed to visit Varosha, which remains entirely sealed with rusting barbed wire and guarded by Turkish troops.

This review of The Sunrise was also in the Autumn edition of Shiny New Books.

4 thoughts on “The Sunrise by Victoria Hislop”