Half of September has gone! I’ve read 5 books and haven’t written about any of them (except for one and that’s for the Shiny New Books blog – more about that book later). The other four books are: 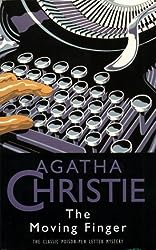 It’s much easier to write about a book straight after I’ve read it, so today’s post is about the last book I’ve finished, which is The Moving Finger by Agatha Christie. I’ll try to nudge my brain into writing about the other books as soon as I can.

The Moving Finger is a book I’ve had for a few years now, so it’s one off my to-be-read shelves. It is described as a Miss Marple mystery, but as she doesn’t appear in the book until three-quarters of the way through and after there have been two deaths, she doesn’t have a big part, although she is instrumental in unveiling the murderer.

The story is narrated by Jerry Burton, who has recently moved into the market town of Lymstock with his sister, Joanna. His doctor had instructed him to move to the country where he can take things slowly and easily whilst he recovers from a flying accident. Lymstock seems to be a ‘peaceful backwater where nothing happens‘, but soon after the Burtons have moved in Joanna receives a very nasty anonymous poison-pen letter. They discover that other people have also received them, and soon afterwards Mrs Symmington apparently commits suicide followed by the death of her maid, Agnes, which is without doubt murder.

I liked The Moving Finger. As usual with Agatha Christie’s novels there are plenty of suspects, including Mrs Cleat, well-known as the ‘local witch’, and there are plenty of clues, with a good deal of misdirection throwing me into confusion about who could possibly be the culprit. She captures the nastiness of the anonymous letters well with their accusations of illicit sexual activities. I always think Agatha Christie excels with her dialogue. It’s all so natural and I have no difficulty following who is speaking. I was also convinced about the characters, especially Megan Hunter, Mrs Symmington’s twenty-year old daughter and her relationship with her step-father. Lymstock, itself is a place about fifty years behind the times, but by no means the ‘peaceful backwater where nothing happens‘ that Jerry Burton was seeking.

The police are eventually called in, in the person of Superintendent Nash who then requests help from an expert from London on anonymous letters – Inspector Graves. But the vicar’s wife, Mrs Dane Calthrop isn’t satisfied and brings in an expert of her own, an expert who ‘knows people‘, ‘someone who knows a great deal about wickedness‘ and that person is of course, Miss Marple.

The Moving Finger was first published in 1942 in New York and then in the United Kingdom in the spring of 1943. Along with the puzzle, Agatha Christie, speaking through her characters. makes several comments that interested me – on work/idleness for example. The local doctor’s sister, Miss Griffith, who is a Girl Guide leader, states that idleness is an unforgivable sin, and in response Jerry Burton says:

Sir Edward Grey … afterwards our foreign minister was sent down from Oxford for incorrigible idleness. The Duke of Wellington, I’ve heard, was both dull and inattentive to his books. And has it ever occurred to you, Miss Griffith, that you would probably not be able to take a good express train to London if little Georgie Stephenson had been out with his youth movement instead of lolling about, bored, in his mother’s kitchen until the curious behaviour of the kettle lid attracted the attention of his idle mind?

Another example – considering whether Providence/the Almighty/God would permit dreadful things to happen ‘to awaken us to a sense of our own shortcomings‘, Jerry Burton responds:

There’s too much tendency to attribute to God the evils that man does of his own free will. I might concede you the Devil. God doesn’t really need to punish us, Miss Barton. We’re so very busy punishing ourselves.

Re-reading at her detective novels, Agatha Christie wrote in her Autobiography:

I find that one I am really pleased with is The Moving Finger. It is a great test to re-read what one has written some seventeen or eighteen years later. One’s views change. Some do not stand the test of time, others do.

7 thoughts on “Catching Up”