I’ve read a couple of novels this year that deal with mental illness – The Bell Jar by Sylvia Plath, which I found a bit confusing and disjointed and The Grass is Singing by Doris Lessing. My reaction to both books was that they are bleak and depressing, showing the breakdown of a personality and I struggled to read them. (See my thoughts on Doris Lessing’s book in this post.) 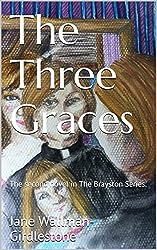 So, I was a bit hesitant about reading The Three Graces when I realised that it was a novel dealing with the subject of schizophrenia. I needn’t have been concerned as it is by no means a depressing novel. This is Jane Wallman-Girdlestone’s description of her book (taken from her website):

… Grace Hunter, the newly appointed Team Rector for the town, turns out to be nothing like people expect.  Nobody suspects that she has a guilty secret.  No one guesses that the local funeral director is the answer to the Rector’s prayers.  No one in their right mind would have thought that workaholic Grace was tormented by imaginary friends who dominated everything she did.

Grace Hunter is trying to adjust to her new appointment as Team Rector, but her confusion grows as she begins to have hallucinations. It’s a remarkable book because although told in the third person at times I wasn’t sure that the people she sees were just in Grace’s head. I think it’s a very clever portrayal as the reader sees things through Grace’s eyes and mind whilst she is carrying on with everyday living and her job as Rector. Grace’s behaviour becomes reckless, at times divorced from reality. It clearly demonstrates how difficult/impossible it is for her to distinguish between what is real and what is not.

The Three Graces follows Grace’s life and to a lesser extent that of her family – husband Tom, Josh and Ros her step-children and her father-in-law, Charlie. They are all having to adjust to Tom and Grace’s marriage and the move to St Anthony’s, their third in five years. And they’re all feeling very unsettled. The dominant character in the novel is Grace; it all revolves around her and as her confusion grows it affects them all. It is an engrossing book, the writing is clear and concise, and the characters are clearly defined. It’s a well-structured novel, the tension and emotional atmosphere gradually rising and Grace’s feelings of despair and confusion and are all very evident. The book is certainly an enlightening read for me.

About the author (From Amazon):

Jane Wallman-Girdlestone was born and grew up in Tooting, South London. She began writing about her life experiences at eight. Jane taught briefly before working in theatre as a writer and director. She later worked as a Vicar and chaplain for some years before lecturing in Theology and Spirituality. Jane works with people who are on retreat offering creative and spiritual mentoring and as a counsellor.

Jane lives in the Highlands of Scotland in the UK, where she writes and paints. She is married and has three Newfoundland dogs and a cat.

The Three Graces is the second book in the Brayston series. Sausages and Trash is the first and the third, with the working title Sleight of Hand, will be published on Kindle in December. This will feature some of the characters from the first two books and I’ll be looking out for it.

NB:  The Three Graces is temporarily unavailable on Kindle.

3 thoughts on “The Three Graces by Jane Wallman-Girdlestone”