Sometimes I get requests from authors/publishers to review books and occasionally a book just turns up in the post unannounced. Over a year ago now I 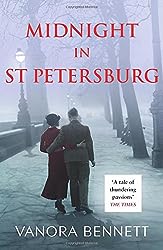 unexpectedly received a copy of Midnight in St Petersburg by Vanora Bennett and although it appealed to me I put it to one side whilst I finished other books. It has taken me until now to get round to actually reading it.

And I’m glad I did as it is an interesting book – historical fiction beginning in 1911 in pre-revolutionary Russia with Inna Feldman travelling by train to St Petersburg to escape the pogroms in Kiev hoping to stay with her distant cousin, Yasha Kagan. She is welcomed into the Leman family where she and Yasha are apprentices in their violin-making workshop. Inna is a talented, albeit shy, violinist and she falls in love with Yasha through their shared love of music.

The book is split into three sections – September – December 1911, 1916-17 and 1918-19 as Russia enters the First World War and is plunged into Revolution and life becomes increasingly dangerous for them all. Inna is torn between her love for Yasha, wildly rebellious and an activist in the revolution, and the older and more secure Englishman, Horace Wallick who works for the jeweller, Faberge, painting miniatures. It’s a story of survival under extreme conditions.

I liked the way Vanora Bennett intermingled Inna’s personal story with the historical characters of the time, including Father Grigory, Prince Youssoupoff and Lenin. I particularly liked the Father Grigory sections. Inna first met him on the train to St Petersburg when he helped her and I had my suspicions about who he really was, although it was a while before Inna discovered his identity. I also thought the details of violin-making were fascinating and I really liked the sections about Horace and his work for Faberge. What is perhaps even more fascinating is that Horace Wallick was a real person, Vanora Bennett’s great-great-uncle who really did work for Faberge from 1910 to 1919, which makes the story all the more authentic.

However, I thought the pace of the novel wasn’t very well structured as after an attention grabbing opening I thought it dragged a bit in the middle and that it was drawn to a too hasty conclusion. Overall, though I thought this portrayal of the Russian Revolution and the effect it had on ordinary people was well done and I did enjoy it.

This is the second of Vanora Bennett’s books I’ve read – the first was Portrait of an Ordinary Woman the story of Sir Thomas More’s fall from Henry VIII’s favour and that of his adopted daughter Meg Giggs. I shall look out for more of her books.

5 thoughts on “Midnight in St Petersburg by Vanora Bennett”