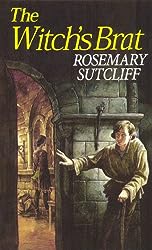 Rosemary Sutcliff was one of my favourite authors when I was a child, but it’s been years since I read any of her books. I came across her children’s book, The Witch’s Brat after reading Mary Delorme’s novel, St Bartholomew’s Man about Rahere, the founder of St Bartholomew’s Hospital. I wanted to know more about Rahere and discovered that he featured in Rosemary Sutcliff’s book set in 12th century England.

The Witch’s Brat, first published in 1971, tells the tale of Lovel, a boy born crippled with a twisted leg and crooked shoulder, but also with a gift for healing. His grandmother was the local Wise Woman whom people feared thinking she was a witch, and after she died he was driven from his village in a shower of stones, both because he was her grandson and because he was a cripple. He is taken in by the monks at a priory and it is here that he meets Rahere, who encourages him to be a healer. This is how Rahere looked when Lovel first met him:

Lovel gazed with his mouth open in awed delight at this mad and magnificent man with the monk’s face and the cool mocking voice and long fantastic legs like a crane fly, who spoke English, but in such splendid and far-off words that much of it was as far beyond his reach as the Norman French spoken by most of the knights and wealthy travellers who passed that way, and by some of the brethren among themselves. (page 29)

It’s a beautifully written little book (112 pages), full of period detail, including herbal lore and vivid imagery. Like St Bartholomew’s Man it’s about the building of St Bartholomew’s Hospital, but seen through Lovel’s eyes instead of through Rahere’s. As well as being historical fiction, this book is about overcoming prejudice and and disability. Rahere is seen as a charismatic character, an inspiration to Lovel, a man who thought there must be more to life than entertaining a king and who vowed to raise an infirmary, a hospital for the poor sick.

This a ‘feel good’ book that is a delight to read.

4 thoughts on “The Witch's Brat by Rosemary Sutcliff”