One of the things that struck me when I was reading Agatha Christie’s An Autobiography was her love of houses. It stemmed from her childhood dolls’ house. She enjoyed buying all the things to put in it – not just furniture, but all the household implements such as brushes and dustpans, and food, cutlery and glasses. She also liked playing at moving house, using a cardboard box as a furniture van.

Writing about her life with her husband, Max Mallowan she wrote:

We were always choosing sites for houses. This was mainly owing to me, houses having always been my passion – there was indeed a moment in my life, not long before the outbreak of the second war, when I was the proud owner of eight houses. (page 440 of An Autobiography) 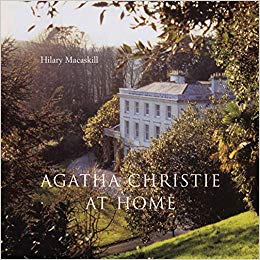 So when I saw that Hilary Macaskill had written this book – Agatha Christie at Home – I knew immediately that I wanted to read it. It’s a beautiful book, with many photographs – more than 100 colour photos – illustrating Agatha’s life and homes. I took my time reading it, first of all looking at the photos, before reading the text.

There is a Foreword by Mathew Prichard, her grandson, explaining the love his grandmother had for Devon, in particular for Torquay, where she was born and Greenway, the house that had a special place in her heart.  He expressed his hope that this book will ‘transmit some of the magic that my whole family felt when they were there.’  And this book does indeed do that!

There is an overview of Agatha Christie’s life followed by descriptions of the houses and countryside she loved – from Ashfield in Torquay her first home, where she was born and brought up to Greenway, a Georgian mansion above the River Dart, now owned by the National Trust.

There are no spoilers in this book but Hilary Macaskill has identified the settings Agatha Christie used in her books and how some of the place names have been altered, but are still recognizable from her descriptions. I hadn’t realised that the names of some of her characters are taken from the names of streets or villages, such as Luscombe Road in Paignton which she adopted for Colonel Luscombe in At Bertram’s Hotel.

It’s a useful book too if you want to find out more about visiting Devon with tourist information and website addresses. The final chapter is about Agatha Christie’s legacy and her continuing popularity both nationally and internationally. As well as being able to visit Greenway, which has been restored to the way it was when Agatha lived there, there are events to celebrate her life and works, such as the annual Agatha Christie week that takes place in Torquay each September around her birthday.

I haven’t been to Greenway, although I have stayed in Torquay, but that was before Greenway was open to the public. It is enormously popular – on the first day it was opened over 400 visitors came to see the house. But Agatha Christie was a very private person and I can’t imagine what she would have thought about that. After all she had refused permission for an ‘authorized life’ to be written, stating:

‘I write books to be sold and I hope people will enjoy them but I think people should be interested in books and not their authors.’ (page 129)

Knowing that I think I’d feel I was invading her privacy if I did go to Greenway!

3 thoughts on “Agatha Christie at Home by Hilary Macaskill”