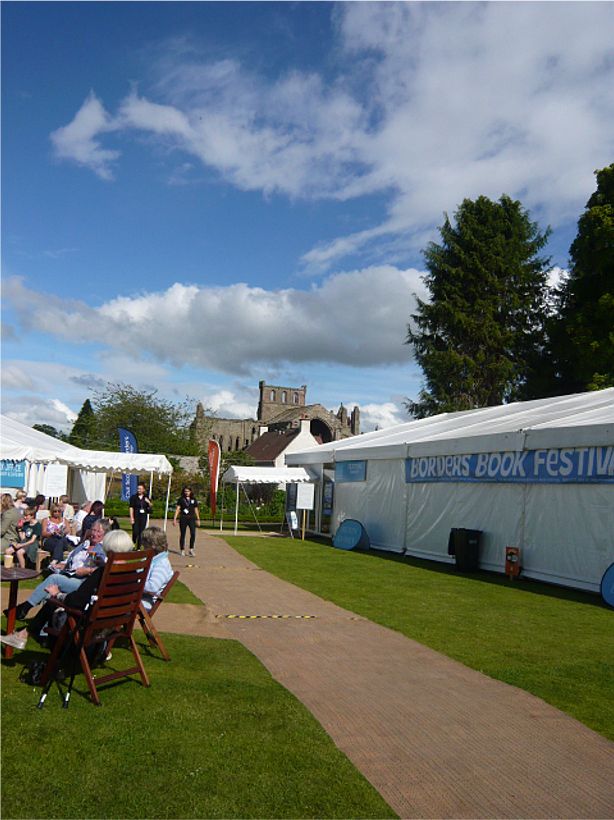 I was looking forward to Hilary Mantel’s talk last night at the Borders Book Festival in Melrose. I was not disappointed – far from it. It was a memorable evening as we sat in the packed Festival Marquee as Hilary Mantel and Kirsty Wark carried on their conversation. It was brilliant, or as Kirsty said at the end thanking Hilary – ‘it was absolutely fantastic’!

Here are some of my impressions:

Hilary Mantel is not only a fantastic writer she is also an articulate speaker – she is so enthusiastic about her subject and spoke with fluency, clarity, conviction and with power. She began by reading a short extract from Bring Up the Bodies, describing Thomas Cromwell, his appearance and his view of the portrait Hans Holbein had painted.The passage came to life as she spoke the words she had written.

After that the conversation between the two women flowed effortlessly. I’ve seen both on TV and read many of Hilary Mantel’s book but they both have so much more presence in person. It was magnetic and mesmerising as they talked about the process of writing – does Hilary Mantel write her historical novels sequentially moving forward through history? No, she doesn’t. She researches, surrounds herself with her notes, her ideas and jots down descriptions, sections of dialogue and scenes, so that at no point can she answer where she is up to in the book – she cannot tell you the year, how many pages she has written, only that she needs another eighteen months before it will be finished.

She lives in a parallel world – in the present and in the world of Cromwell and Henry VIII, plus all the characters, at one and the same time. It is always with her. When she started to write about Cromwell it was just going to be one book, but that soon changed and at present she is writing about the third book (The Mirror and the Light), leading up to Cromwell’s death. She tries as far as possible to be historically accurate, for the dialogue to be correct, but as a lot of what happened was not recorded – eg there is no transcript of Anne Boleyn’s trial – what she writes is her offering, her interpretation as it were.

I was pleased Kirsty Wark asked her about writing in the present tense (something I often have difficulty reading, but didn’t in either Wolf Hall or Bring Up the Bodies). I can’t remember precisely but I think Hilary Mantel replied that she saw the people as though the scenes were being acted out before and wrote it as it happened. If that is not what she said that is the impression I came away with. I only know that for me in these books it all came to life as I read it with an immediacy that I don’t often find in novels – I was there, not just an observer.

Kirsty Wark even touched on the question of the criticism Hilary Mantel had had over her comments about Kate Middleton. Her reply was a master of diplomacy, but it had upset her that her words had been taken out of context and she expressed her amazement at being woken one morning to find the press camped outside her house two weeks after her speech.

There were a few questions from the audience – would she write a prequel about Thomas Cromwell’s life on the continent, before the events in Wolf Hall. She liked that question but answered that she probably wouldn’t – there was little documentary evidence about all the places he’d been to and what he did, but I’m guessing she would have liked to have attempted it.

There was so much more said  – but I’ll stop here. It was a grand night out – an event I’m delighted to have experienced.

9 thoughts on “Hilary Mantel at the Borders Book Festival”