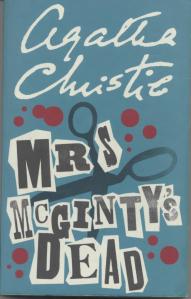 I think Agatha Christie enjoyed herself writing Mrs McGinty’s Dead, especially the character of the crime novelist, Ariadne Oliver. It was first published in 1952 and written not long after the end of the Second World War, reflecting the difficulties of finding employment and the changes for the post-war impoverished middle classes.

Hercule Poirot is rather bored, missing his friend Hastings and finding that his days are revolving around his meals: ‘One can only eat three times a day. And in between there are gaps.’ Even a newspaper report about the result of the McGinty trial doesn’t interest him: ‘It had not been an interesting murder. Some wretched old woman knocked on the head for a few pounds. All part of the senseless brutality of these days.‘

It is only when Superintendent Spence comes to him for help, convinced of the innocence of James Bentley, convicted of the murder and under sentence of death that Poirot agrees to reinvestigate the case. And so it is that he goes to the village of Broadhinny, treating it as a ‘challenge to the little grey cells of my brain.’

He investigates in his usual way, with method and logic, first of all by considering the motive and then looking at the characters of Mrs McGinty and James Bradley. He decides that the answer is to be found in the personality of the murderer.There is a sense of urgency, as the death penalty was still in force and there is little time left before James Bentley is due to be hanged. Poirot talks to Mrs McGinty’s neighbours and the people she worked for as a charlady and eventually solves the mystery, but not without a second murder and nearly getting killed himself.

It’s a lively book, the characters and dialogue moving the plot along smoothly. There are plenty of surprises and a lot of misdirection before the killer is revealed. The clues are all there and although I did pick up on the main clue, I picked the wrong person as the murderer.

As always, for me, there is more to the book than the puzzle of the murders, and in Mrs McGinty’s Dead there are several things, including the view Agatha Christie paints of life in an English village not long after the war (usually the setting for a Miss Marple mystery), the mix of characters, working class and middle class, the very amusing picture of the dreadful Bed and Breakfast, run by Major Summerhayes and his wife, Maureen, where Poirot stays in Broadhinny, and then there is Ariadne Oliver.

In portraying Ariadne I think Agatha Christie is revealing her feelings about writing about Poirot, a character she described in her Autobiography as ‘hanging round my neck, firmly attached there like the old man of the sea.’ Ariadne’s detective is a Finn, Sven Hjerson and she has been writing about him for thirty years:

How do I know why I ever thought of the revolting man? Why a Finn when I know nothing about Finland? Why a vegetarian? Why all the  idiotic mannerisms he’s got? …

And people even write and say how fond of him you must be. Fond of him? If I met that bony, gangling, vegetable-eating Finn in real life, I’d do a better murder than any I’ve invented. (page 201)

She also reveals her feelings about playwrights adapting her plays (and about money for her books!):

So far it’s pure agony. Why I ever let myself in for it I don’t know. My books bring me quite enough money – that is to say the bloodsuckers take most of it, and if I made more, they’d take more. But you have no idea of the agony of having your characters taken and made to say things that they never would have said, and do things that they never would have done. And if you protest, all they say is that it’s “good theatre”. (page 125)

She also wrote in her Autobiography about the ‘terrible suffering you go through with plays, owing to the alterations made in them.'(page 448). I find it reassuring that she didn’t like the way dramatisations changed her books, because I don’t either, although I do like David Suchet as Poirot and Joan Hickson as Miss Marple.

There are references to real life murder cases. On the Sunday before her death, Mrs McGinty had been reading the Sunday Comet, which had an article on women victims of tragedies from the past. Poirot looks at these in detail, concluding that one of the women might have been in Broadhinny when the murder took place.

A short while ago I wrote a guest post for Alyce’s blog At Home With Books about the best and the worst of Agatha Christie’s works. Trying to decide between her numerous novels which one is the best is an impossible task, but I think that Mrs McGinty’s Dead is up there amongst the best of them.