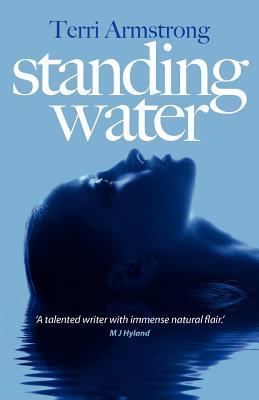 Last week (28 February 2012) Terri Armstrong’s debut novel Standing Water was published. Pre-publication it won the 2010 Yeovil Literary Prize and I can understand why. I thoroughly enjoyed it. It’s a fascinating story set in and near the fictional town of Marrup in the Western Australia Wheatbelt, an area suffering from drought – there’s been no rain for a couple of years. This is the scene that greets Dom Connor on his return home for his mother’s funeral after eight years away:

Boards blanked out the doors and windows of the old stone post office. Abandoned shops, charming wooden structures with wide windows and tin roofs, gaped out into the road, their facia lettering bleached to vague outlines by the sun. Wheat-coloured grasses grew out of cracks in the footpath in front of what used to be the bakery, a seventies building of pale brick, where his mum had bought creamy vanilla slices on Saturday mornings. (page 22)

Dom is returning to the family farm which his older brother, Neal has been running ever since their father died. Dom and Neal don’t get on and despite Dom’s attempts to improve their relationship, the tension between them is on a short fuse. Neal can’t express his emotions and thoughts until they are forced out him uncontrollably. His relationship with his wife, Hester, is also on a knife edge, although he loves her.

The book is narrated in the third person mode, through three of the characters’ perspectives – Dom, Hester and Andy, a boyhood friend of Dom’s. We never get Neal’s point of view, but each of the other characters cast light on his personality. Hester, has never met Dom before his return, but Andy, a recovering drug addict, has links with her past as well as with Neal’s and Dom’s. When Andy turns up, looking for reconciliation with his parents, secrets of both the past and the present are gradually revealed and the tension inexorably mounts.

I was completely engrossed in this book, which is about friendships, sibling rivalry, parent/child relationships, and love and betrayal. The characters are convincing and the setting is superb. I could feel the heat, see the landscape, the farms, the plants, birds and the Dog Rock, a huge rock overlooking a panorama of flat land below its sixty foot height, with tiny caves at its base.

It’s not surprising that the location is so convincing as Terri Armstrong is an Australian, now living in Norwich, having moved to the UK in the late 1980s. For more information visit Terri’s website. She is currently working on her second novel, which is based in London. I’ll be looking out for it.