Last August I read The House at Riverton by Kate Morton and thought it was one of the best books I’d read in 2007. So it was with great anticipation that I started to read The Forgotten Garden. It starts off well, with a little girl in London in 1913 on a boat bound for Australia. The lady who took her to the boat has disappeared and the little girl is found alone on the Maryborough wharf, with no name and no family. All she can remember is that the name of the lady is the Authoress and she has a little white suitcase containing a book of fairy stories written by the lady. 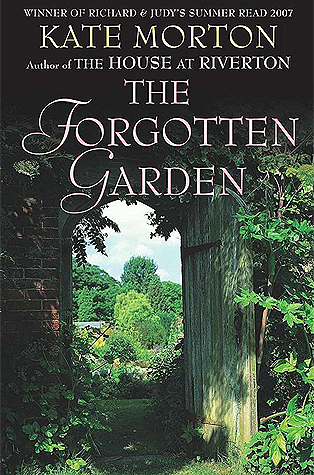 The novel is about three women – Eliza, Nell and Cassandra and follows their lives from 1900 to 2005. Nell is the little girl in the opening chapter and the book reveals the story of her birth. Of course it’s not just as simple as that – there are several mysteries in this long book. It’s quite easy to read once you have got used to jumping from England in 1913 to Australia in 2005, and in and out of the 1930s and 1975 in both countries and back again to 2005 in England and Australia and sorting out the characters of the three women.

I was enjoying it and then I realised that I was reading a re-working of The Secret Garden, as Eliza is taken as a child of twelve to live with her aunt and uncle at Blackhurst Manor in Cornwall, just as Mary is taken to live with her uncle at Misselthwaite Manor on the Yorkshire Moors, both houses in isolated places, both girls finding it difficult to fit into their new surroundings, both with maids who help them settle in, both with walled gardens and secrets to be discovered. Even down to both having sickly cousins who stay in their rooms.

I was so disappointed that I stopped reading the book! But I picked it up again the next day and carried on. I worked out the ‘mystery’ quite easily and found the book rather predictable, which was also disappointing. Nell attempts to find out the truth about her parents and in 1975 travels to England, eventually finding Blackhurst Manor where the Mountrachet family used to live. After her death in 2005, Cassandra her granddaughter discovers she has been left a surprise inheritance, Cliff Cottage and its forgotten garden in Cornwall, now derelict.

It wasn’t just the predictability of the story I found a let down, I also had difficulty picturing the settings and working out the locations of the cottage, its garden, the maze and Blackhurst Manor even though I re-read their descriptions several times.

I read this book whilst on my recent travels along with The Other Side of You by Salley Vickers, which I also found a bit disappointing – more about that some other time maybe. Other reading this week has been more enjoyable with The Fall of Troy by Peter Ackroyd and Wessex Tales by Thomas Hardy. I also finished reading The Prime of Miss Jean Brodie by Muriel Spark. I first read this about 10 years ago and was a bit worried that I would find it a let down on re-reading it, but thankfully I thoroughly enjoyed it. It’s the next book up for discussion on Cornflower’s Blog on 12 July. For once I’ve read the book well in advance.

I’m also re-reading The Scarlet Pimpernel by Baroness Orczy for the Heart of a Child Challenge. A tale of the French Revolution, a time of terror and tension as the dashing Englishman rescues French aristos destined to death by guillotine. I loved this book as a child and so far it’s living up to my expectations.

19 thoughts on “The Sunday Salon”