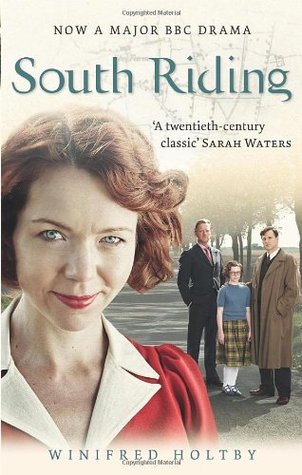 The community of South Riding, like the rest of the country, lives in the long shadow of war. Blighted by recession and devastated by the loss, they must also come to terms with significant social change.Forward-thinking and ambitious, Sarah Burton is the embodiment of such change. After the death of her fiancé, she returns home to Yorkshire focused on her career as headmistress of the local school. But not everyone can embrace the new social order. Robert Carne, a force of conservatism, stands firmly against Sarah. A tormented man, he carries a heavy burden that locks him in the past.

As the villagers of South Riding adjust to Sarah’s arrival and face the changing world, emotions run high, prejudices are challenged and community spirit is tested.

I bought Winifred Holtby’s sixth and last novel, South Riding, after watching the BBC television adaptation by Andrew Davies, starring Anna Maxwell Martin and David Morrissey, broadcast in February 2011. And I’ve  only just got round to reading it – it was well worth the wait. It’s one of those books that make you feel as though you are there taking part in the action – I was totally immersed in the story and I loved it.

The book was first published in 1936, six months after Winifred Holtby’s death, aged 37, from Bright’s disease. Set in the early 1930s in Yorkshire it paints a moving and vivid portrait of a rural community struggling with the effects of the depression.

South Riding is a fictional place – Yorkshire consists of a North, East and West Riding – there is no South Riding. The word Riding is derived from a Danish word ‘thridding’, meaning a third. The invading Danes called representatives from each Thridding to a thing, or parliament and established the Ridings System. South Riding is based on the East Riding where Winifred Holtby’s mother was a county alderman, but she explained in a prefatory letter to her mother that Alderman Mrs Beddows was not Alderman Mrs Holtby, that the characters were not her colleagues on the county council and that the incidents in the book were not derived from her mother’s experience.

Nevertheless,the main focus of the novel is centred on local politics and the work of the county council in dealing with a variety of issues  including social issues, education, unemployment, local building programmes, poor relief and the treatment of the insane. There is a large cast of characters and a list is given at the start of the book, which I found most helpful.

It is an intensely detailed story, involving many sub-plots as the lives of all the characters unfold. The main characters are Sarah Burton, the new headmistress of Kiplington High School for Girls, a fiercely passionate and dedicated teacher; Councillor and farmer Robert Carne of Maythorpe Hall and his struggles both personal and financial; Joe Astell, a socialist fighting poverty; and Mrs Beddows, the first woman alderman of the district, a strong older woman (age 72), a generous and charitable woman – my favourite character. This is how Winifred Holtby describes her:

She was a plump sturdy little woman, whose rounded features looked as though they had been battered blunt by wear and weather in sixty years or more of hard experience. But so cheerful, so lively, so frank was the intelligence which beamed  benevolently from her bright spaniel-coloured eyes, that sometimes she looked as young as the girl she still, in her secret dreams, felt herself to be. (pages xxiv-xxv)

And here is one of the passages in which she describes Sarah Burton:

Sarah believed in action. She believed in fighting. She had unlimited confidence in the power of the human intelligence and will to achieve order, happiness, health and wisdom. It was her business to equip the young women entrusted to her by a still inadequately enlightened state for their part in that achievement. She wished to prepare their minds, to train their their bodies, and to inculcate their spirits with some of her own courage, optimism and unstaled delight. (page 42)

I could go on – all the characters are clearly defined and well rounded people and the locations bring the area to life, showing the contrast in living conditions between the different sections of society.

In short South Riding is a wonderful book, portraying life in the 1930s. I would very much like to re-read and enjoy it again and again. I’m sure that I would find plenty in it that I’ve missed on this first reading.

South Riding is my 18th book for Bev’s Mount TBR 2017 challenge and my final book for Charlie’s What’s in a Name Challenge 2017.