I had intended to read one of Thomas Hardy’s books in June as part of the Celebrate the Author Challenge. Hardy was born on 2 June 1840 at Higher Brockhampton, near Dorchester. I’ve read some of his books and thought I read one I hadn’t previously read for the challenge, but I didn’t get one until yesterday, when I borrowed two from the library – Wessex Tales and A Pair of Blue Eyes.

Both Wessex Tales and A Pair of Blue Eyes are Wordsworth Classics editions, with introductions and notes on the text. It’s refreshing to find in Wessex Tales a General Introduction which states

… because the pleasures of reading are inseparable from the surprises, secrets and revelations that all narratives contain, we strongly advise you to enjoy this book before turning to the Introduction.”

A Pair of Blue Eyes was Hardy’s third novel.  I haven’t started it yet, so I’m not revealing anything that isn’t on the back cover. Apparently this book has a central scene that “shocked and stimulated Victorian readers” and “caused Hardy to be embroiled in arguments concerning the sexual morality of his novels.” We’re not so easily shocked these days, but who knows, I may be in for a surprise when I read this book.

I’ve tried not to reveal too much in writing about Wessex Tales. 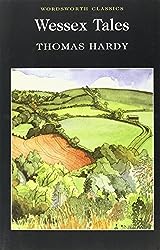 Wessex Tales was first published in 1888. It is subtitled: Strange, Lively and Commonplace. As soon as I started to read the first tale, The Three Strangers, I was drawn back into Hardy’s world and this story has all those elements. Strange, because it has a satisfying twist in the tale. It is set in the 1820s in an agricultural England that no longer exists, but can still be seen in the landscape in the form of solitary cottages, ancient hedges (that have survived the 19th century inclosures) and the “long, grassy and furzy downs”. Lively, because the tale has so many elements of a folktale with the appearance at a christening party of three strangers on a cold, stormy, winter’s evening. I liked this description of how wild and wet it was:

The level rain-storm smote walls, slopes and hedges, like the cloth-yard shafts of Senlac and Crecy. Such sheep and outdoor animals as had no shelter stood with their buttocks to the wind; while the tails of little bird trying to roost on some scraggy thorn were blown inside-out like umbrellas.

Commonplace, because the tale is full of information about the daily lives of country labourers – shepherds, hedge-carpenters, dairymen and a detailed description of how mead was made. There is also a sense of the macabre about this tale. Who are the three strangers, who arrive at intervals during the evening and are slow to say who they are and why they are there? It becomes clear that one of them is a hangman, which casts a sinister shadow over the evening.

I’ve written before how I sometimes find short stories too short to be satisfying, either leaving me feeling the characters are sketchy and incomplete, or thinking “so what?”. Hardy’s Tales just aren’t like that – even A Tradition of Eighteen Hundred and Four which is only 6 pages long is complete – I could visualise the characters from the succinct descriptions. The tale is narrated by Solomon Selby in the “yawning chimney-corner of the inn-kitchen” as he withdrew

the stem of his pipe from the dental notch in which it habitually rested, he leaned back in the recess behind him and smiled into the fire. The smile was neither mirthful or sad, not precisely humorous nor altogether thoughtful. We who knew him recognised it in a moment: it was his narrative smile.

You could almost believe that the events in this story actually happened. It held my interest right from the opening sentence:

The widely discussed possibility of an invasion of England through a Channel tunnel has more than once recalled old Solomon Selby’s story to my mind.

I can’t write about this without revealing something of the story, so if you want to read it, don’t read on.

The fear of invasion is from the French. Bonaparte had crossed the Alps, fought in Egypt, “drubbed the Turks, the Austrians, and the Proosians, and now thought he’d have a slap at us.”  Where on the coast would his troops land and was it “Boney” that Solomon saw on the shore? In the preface to the Tales Hardy wrote that in 1882 when he first published this story he had invented the incident of Napoleon’s visit to the English coast, but had been surprised several years later to be told that it was a real tradition.