The Nightingale, in 2015 was voted a best book of the year by Amazon, Buzzfeed, iTunes, Library Journal, Paste, The Wall Street Journal and The Week.  Additionally, the novel won the coveted Goodreads and People’s Choice Awards. The audiobook of The Nightingale won the Audiobook of the Year Award in the fiction category. And I can see why.

Despite their differences, sisters Vianne and Isabelle have always been close. Younger, bolder Isabelle lives in Paris while Vianne is content with life in the French countryside with her husband Antoine and their daughter. But when the Second World War strikes, Antoine is sent off to fight and Vianne finds herself isolated so Isabelle is sent by their father to help her.

As the war progresses, the sisters’ relationship and strength is tested. With life changing in unbelievably horrific ways, Vianne and Isabelle will find themselves facing frightening situations and responding in ways they never thought possible as bravery and resistance take different forms in each of their actions.

The Nightingale is one of the most moving books I’ve read and I was emotionally drained by the end of the story. It tells of two French sisters and their experiences during the occupation of France in the Second World War. The younger sister, Isabelle is beautiful, impetuous and a rebel. She joins the Resistance Movement, whereas Vianne, married,  stays at home looking after her daughter whilst her husband goes off to war.

This is a story of courage, of love and of the determination to survive under dreadful and appalling conditions – the horrors and dilemmas of living in an occupied country under Nazi rule, with rationing, curfews, and the dangers of being caught helping or of being a Resistance fighter. Vianne was faced with the dilemmas of whether to collude with the Nazi officers billeted in her house and whether to help her Jewish friend to escape before she could be taken off to the concentration camps. Isabelle takes desperate risks as she helps British and American airmen to freedom over the Alps to Spain. Hannah spares no details and I struggled to read the details of what people can do to those they consider their enemies.

Interspersed at intervals the narrative moves to 1995 as one of the sisters is invited and goes to a reunion. For a long time I couldn’t decide which one it was and by the time it was revealed I was in tears at the sadness and pathos of it all.

Teaser Tuesdays is hosted by The Purple Booker. Post two sentences from somewhere in a book you’re reading. No spoilers, please! List the author and book title too.

My first paragraph this week is from The Nightingale by Kristin Hannah, which I’m currently reading. It’s one of my TBRs. 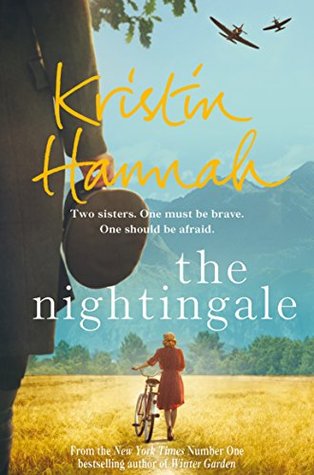 If I have learned anything in this long life of mine, it is this: In love we find out who we want to be; in war we find out who we are. Today’s young people want to know everything about everyone. They think that talking about a problem will solve it. I come from a quieter generation. We understand the value of forgetting, the lure of reinvention.

Beginning in 1995 this novel moves back in time to the start of the Second World War to France.

Here is a teaser from page 88:

Vianne’s anger dissolved; without it, she felt inexpressibly tired. This essential difference had always been between them. Vianne the rule follower and Isabelle the rebel. Even in girlhood, in grief, they had expressed their emotions differently.

Despite their differences, sisters Vianne and Isabelle have always been close. Younger, bolder Isabelle lives in Paris while Vianne is content with life in the French countryside with her husband Antoine and their daughter. But when the Second World War strikes, Antoine is sent off to fight and Vianne finds herself isolated so Isabelle is sent by their father to help her.

As the war progresses, the sisters’ relationship and strength is tested. With life changing in unbelievably horrific ways, Vianne and Isabelle will find themselves facing frightening situations and responding in ways they never thought possible as bravery and resistance take different forms in each of their actions.

I’ve read nearly half the book so far and am really enjoying it, but I’m not sure yet about the identity of the narrator in the opening chapter – which sister is it? I keep changing my mind about it. Please don’t tell me if you know – that would be a such a spoiler …

I’ve been reading some of Hans Christian Andersen’s Fairy Tales as part of Carl’s Once Upon A Time event, specifically in the Short Story Quest. So far I’ve written about The Rose Elf, The Shepherdess and the Sweep, and The Snow Queen.

I’ve been disappointed in some of the other stories, some are gruesome and moralistic.  I don’t remember feeling that about them when I first read them as a child, which shows, I suppose, the different approach children have to such tales, or maybe it’s just me.

In my descriptions of today’s stories I have not concealed the endings. It’s difficult to write meaningfully without doing so or to decide what should not be revealed in these stories and anyway they are well known and have been told or retold in one form or another. But if you don’t want to know how they end please be aware that there are spoilers in what follows.

First, The Red Shoes, in which a little girl, Karen, longs to have a pair of shiny red shoes, even though the old lady who had adopted her told her that the shoes were very wrong and unbecoming. Karen disobeys her and wears the red shoes to go to church. But they are magic shoes and they compel her to dance, won’t come off her feet and take her dancing where she doesn’t want to go. The result is just awful.

An angel tells her she must dance until she dies, so that children will see the consequence of pride and vanity. In desperation she begs the executioner to cut off her feet along with the shoes, which then go dancing away by themselves and she is left a cripple with wooden feet. She begs for God’s mercy, is taken into service by a clergyman and eventually dies, ‘her heart was so filled with sunshine, peace and joy that it broke. Her soul took its flight up to heaven.’

The strange thing is that I didn’t remember what happened at the end! So I either stopped reading when the horrible bit began, or have blanked it out of my memory. The moral of the story is to point out the consequences of pride and disobedience.

The next one I read is The Brave Tin Soldier, a bitter-sweet tale that also ends in disaster. I suppose this one is about the dangers of pride too. He is one of twenty five tin soldiers, but he has only one leg as he had been cast last when there was not enough tin left to complete him. He wants to marry the cardboard ballet dancer, standing in the middle of a looking glass lake as it appears that she too has only one leg as she balances with one leg lifted raised so high the soldier can’t see it.

At midnight the Jack-in-a-box opens and the little black imp inside warns the soldier to keep his eyes to himself. The soldier ignores his warning and the imp tells him to just wait until the morning. Morning comes and a draught from the window (or is it the imp’s doing) knocks the soldier off the window and down into the street. He is too proud to call attention to himself when the little by who owns him looks for him and he is swept away down the gutter and ends up in a canal, threatened by a large water rat and is then eaten by a fish. The fish is caught and cooked, whereupon the soldier is saved. But that is not the end as one of the little boys throws him into the fire, a door is opened and the draught carries away the little dancer also into the fire. She blazes up and the tin soldier is melted down, leaving only a tin heart.

It’s true he was brave, but he was also too passive or too proud and so fails to save himself. But I do remember liking this story as a child, but maybe that was because I just accepted his fate.

Much more encouraging is the tale of The Ugly Duckling – a famous story about the duckling who was different from the other ducklings, mocked and picked on by the other birds. I remember seeing this story in the film with Danny Kaye as Hans Christian Andersen and the song: There Once Was an Ugly Duckling – quack, get out, get out of town. Of course the ugly duckling is not a duck at all! I thought of this story whilst watching Springwatch this week when the poor bedraggled blue tit was worn to a frazzle feeding her babies that were actually great tits, not blue tits!

And another story that has a happy ending is The Nightingale -one of my favourites as a child, so I’m pleased I still like it. It’s about a nightingale whose beautiful singing captivates all who hear her, including the Chinese Emperor. She agrees to come to his palace and sing for him, living in a cage but still allowed to fly twice a day. The Japanese Emperor sends him a mechanical bird, decked in rich jewels, which when wound up imitates the nightingale’s song. Everyone loves the artificial bird and the real nightingale flies away.

But eventually the artificial bird’s mechanism became worn out and it could no longer sing. The Emperor was heart broken when the real bird cannot be found and he collapsed close to death. But the live nightingale comes to his rescue and sings to give him hope and consolation and his death is averted. He wants her to return to the palace but she refuses as she can’t live inside, but agrees to come and sing for him in his garden.

It is a beautiful story contrasting art, technology and nature and one that is full of optimism about the joys of life.

I think this will probably be my last post for the Short Story Quest, which I have enjoyed even though some of the stories failed to live up to my memories.