The Immortal Life of Henrietta Lacks by Rebecca Skloot is an outstanding book! It took her more than ten years to research and write and has won numerous awards and been made into a film starring Oprah Winfrey as Deborah Lacks, Renee Elise Goldsberry as Henrietta Lacks, and Rose Byrne as Rebecca Skloot.

I found it all fascinating, but harrowing to read in parts, from all the details of Henrietta’s life, how she was treated for cervical cancer in 1951, when she was just 30, to her death nine months later.  During her diagnosis and surgery cancer cells taken from her tumour were cultured and amazingly those cells multiplied, doubling every twenty four hours. They became known as HeLa cells (pronounced hee-lah) and have formed the basis for much medical research and drug development ever since. It is also a history of the diagnosis and treatment of cancer and considers the ethical issues around ownership of her cells and the distress, anger and confusion this caused her family. It raises many issues not just regarding ethics, but also regarding science, race and class.

Cancer treatment in 1951 with radium was brutal, but what made it worse was that Henrietta was a black woman, living in near-poverty in Baltimore. Black oral history from at least the 1800s tells of kidnapping black people for research and there were disturbing truths behind the stories – doctors did test drugs on slaves and carried out operations to develop surgical techniques. In 1951 Henrietta was treated at Johns Hopkins Hospital, a hospital built for the benefit of Baltimore’s poor, but black residents suspected it had been ‘built in a poor black neighborhood  for the benefit of scientists – to give them easy access to potential research subjects.’ (page 190)

The Lacks family were poor and they misunderstood what was happening. They became fearful and distressed, and some of them were aggressive when they realised with horror that Henrietta still lived on in a way they couldn’t understand. They had no health insurance and received no financial benefit from the research done on the HeLa cells. Rebecca Skloot’s investigation reveals the mental anguish they went through and her account is so very moving. In particular her times with Henrietta’s daughter, Deborah are heart breaking as she records the terrible struggles Deborah had to overcome. It was only years later that Deborah understood that it was her mother’s cancer cells that were still ‘alive’ and not her own normal cells.

‘So we don’t have the thing that made her cells grow forever?’ Deborah asked. Christoph shook his head. ‘Now you tell me after all these years!’ Deborah yelled. ‘Thank God, cause I was wonderin.’

She pointed at a cell on the screen that looked longer than the others. ‘This one is cancer, right? And the rest are her normal ones?’

‘Wait a minute,’ she said,’you mean none of our mother’s regular cells still livin? Just her cancer cells?’

‘Oh! See, and all this time I thought my mother regular cells still livin!’ (page 302)

Rebecca Skloot based her book on an impressive amount of research  – archival documents, scientific and historical research, including legal documents and medical records. She also used Deborah’s personal journals as well as conducting more than a thousand hours of interviews with Henrietta’s family and friends, and lawyers, ethicists, scientists and journalists who have written about the Lacks family.

This is not a dry scientific account – although there is a lot of scientific detail in the book (not all of which I’m sure I fully understood). It is a remarkable and personal record of the Lacks family that comes to life through dialogue, by adopting the language with which each person spoke and wrote. She explains that where she wrote in the first person using Deborah’s voice she was quoting what she said, only edited for length and occasionally clarity. It is brilliantly written, giving me much to think over – one of the most moving books of non-fiction I’ve read!

This week I’m featuring The Immortal Life of Henrietta Lacks by Rebecca Skloot. This is one of the books that I’m currently reading. 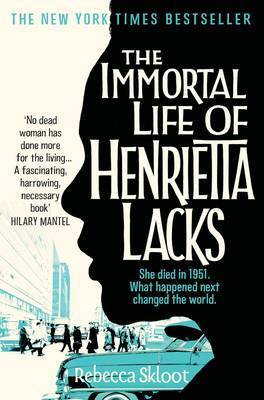 The Woman in the Photograph

There’s a photo on my wall of a woman I’ve never met, its left corner torn and patched together with tape. She looks straight into the camera and smiles, hands on hips, dress suit neatly pressed, lips painted deep read. It’s the late 1940s and she hasn’t yet reached the age of thirty. Her light brown skin is smooth, her eyes still young and playful, oblivious to the tumor that would leave her five children motherless and change the future of medicine. Beneath the photo, a caption says her name is “Henrietta Lacks, Helen Lane or Helen Larson.”

Her name was Henrietta Lacks, but scientists know her as HeLa. Born a poor black tobacco farmer, her cancer cells – taken without her knowledge – became a multimillion-dollar industry and one of the most important tools in medicine. Yet Henrietta’s family did not learn of her ‘immortality’ until more than twenty years after her death, with devastating consequences . . .

Rebecca Skloot’s fascinating account is the story of the life, and afterlife, of one woman who changed the medical world forever. Balancing the beauty and drama of scientific discovery with dark questions about who owns the stuff our bodies are made of, The Immortal Life of Henrietta Lacks is an extraordinary journey in search of the soul and story of a real woman, whose cells live on today in all four corners of the world.

So far, I’ve read 34% and I am thoroughly enjoying this book. It tells Henrietta’s life story, explains the details of her cancer, and the medical details of how her cells were grown, how they have stayed alive and multiplied. It also considers the ethical issues around ownership of her cells, racism and the distress, anger and confusion this caused her family.

I know ‘amazing’ is such an over used word – but this book really is amazing!