July marks the 200th anniversary of Jane Austen’s death and I’m planning to write more about her other books in later posts. I regularly re-read Pride and Prejudice, but it’s been years since I last read Emma – so that is on my list for later this year. I first read Jane Austen’s Northanger Abbey when I was at school and reading it again now was like reading it for the first time.

I really wasn’t going to read any of the Austen Project books (a series of books by contemporary authors give their take on Jane Austen’s novels). I’m not at all keen on adaptations, sequels, or prequels, but I’ve been meaning to read Val McDermid’s books for ages and when I saw her version of Northanger Abbey on the mobile library’s shelves I borrowed it. Although now I’ve read it I think it’s probably not the best of her books to start with. I can’t imagine that it’s representative of her books! 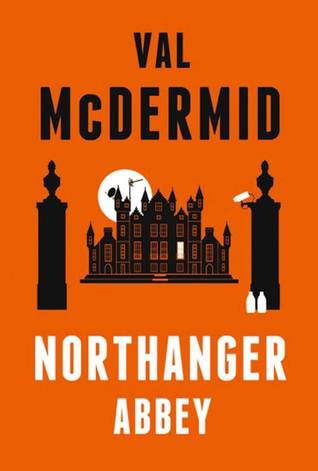 As it’s been so many years since I’d first read the original by Jane Austen I thought I should refresh my memory and re-read it before tackling Val McDermid’s version.

Jane Austen originally wrote the book in 1789-99, then revised it in 1803 and in 1817. Originally called Memorandum, Susan, then Catherine it was first published posthumously along with Persuasion, also previously unpublished, in December 1817, with the title Northanger Abbey, although 1818 is the date on the title page.

Northanger Abbey is a love story about Catherine Morland, a naive and impressionable 17 year-old, whose imagination has been filled with visions of diabolical villains and swooning heroines from the Gothic novels of her day. Childless neighbours, the Allens, take her with them for a six week stay in Bath. Here her eyes are opened to the social complexities of real life. Bath at that time was a thriving spa resort, popular with fashionable society. The place where rich and fashionable people went to take the waters and enjoy the social life, dancing, going to the theatre and concerts, shopping and also to find a husband or wife.

Here, too, Catherine meets the Thorpe family, the insufferable John Thorpe, who she immediately dislikes and his sister, Isabella who she instantly finds to be a kindred spirit – or so she thinks. She also meets and falls in love with clergyman Henry Tilney, whose father, General Tilney owns Northanger Abbey. She is thrilled when Henry and his sister, Eleanor invite her to stay with them at the Abbey, a place she fantasises about, imagining it as one of the romantic buildings full of dark corridors, with remote rooms where females are imprisoned that feature in the Gothic novels she loves.

Even though the Abbey doesn’t live up to her expectations, because although it is part of an ancient building it has been modernised and made comfortable. But that is not enough to prevent Catherine’s imagination running riot, viewing the details of Henry’s mother’s death with great suspicion. The General is a most unlikeable and unpleasant character and she suspects that he could have played a part in his wife’s death – he never talks about her, and shuns her favourite walk in the garden. She imagines all sorts of Gothic horrors.

Northanger Abbey parodies both the Gothic novel and intense female friendships, such as that between Catherine and Isabella as they enthuse obsessively over the horror and romance of the Gothic novel. It’s a book of melodramas and misunderstandings, exposing ambition, greed and the love of power and pleasure mixed with self-interest. Catherine only gradually learns to tell reality from fantasy.

At first I read the two books side by side, a chapter from each. That worked well for a while and it made it easy to see that Val McDermid had followed Jane Austen’s book closely, changing locations and things, such as Edinburgh instead of Bath, the Scottish Borders instead of the Gloucestershire countryside, cars instead of carriages and so on. It’s the style of writing and language that is so very different. I liked the way Val McDermid substituted the Edinburgh Book Festival for Bath – that worked well and also used modern names for the characters – Cat for Catherine, Bella for Isabella and Ellie for Eleanor. And setting  Northanger Abbey in the Scottish Borders is a stroke of genius.

But by the time  I got to the second half of the book where Catherine goes to stay at Northanger Abbey I realised it was Jane Austen’s original that was  appealing more to me, so I finished that first.

I’m not going to go into detail about Val McDermid’s version as she has stuck in the main to the original, that is, until she got to the end. I got tired of the use of modern expressions, tweets, texts and Facebook, and also the silliness of Cat and Bella, and all the vampire nonsense that replaces Catherine’s love of ‘horrid mysteries’. Yes, I could see that it was just as much a spoof on the modern obsession with vampires as Jane Austen’s parody is of the Gothic literature of her day, but I didn’t like it has much as Jane Austen’s version. However, despite that criticism, overall I did enjoy it – it’s light and easy to read.

I was interested in Jane Austen’s list of Gothic novels, which in contrast to the books in Val McDemid’s version, are real books. These are the books that girls and young women were reading in the 1790s and early 1800s (all available today as e-books on Amazon):

Northanger Abbey fulfils the category of ‘a book with a building in the title’ in Charlie’s What’s in a Name Challenge.

The mobile library came yesterday and I borrowed three books:

You Are Dead by Peter James – this is the 11th in his Roy Grace series. I’ve only read two (the first and the third) of the earlier books. I know I should probably read them in order but sometimes you have to take what’s available at the time and fill in the gaps later. I’m hoping it reads well as a stand-alone.

It’s set in Brighton and it’s about current cases of missing women and the discovery of the remains of women who went missing in the past. Are these events connected and if so how?

Duchess of Death: the Unauthorised Biography of Agatha Christie by Richard Hack, drawing on over 5000 unpublished letter, documents and notes. I’m not at all sure I shall actually read this book, but I thought I’d borrow it just to have more time to look at it. I’ve read Agatha Christie’s Autobiography, which is an excellent book that took her 15 years to write, and a few other biographies about her, some better than others.

I don’t like the title, Duchess of Death, which I suppose Hack chose for its alliteration. The jacket cover blurb says it is ‘as full of romance, travel, wealth and scandal as any whodunit she crafted.’ I have a feeling this will not be one of the better biographies.

And finally I borrowed Northanger Abbey by Val McDermid, one of the Austen Project series (in which six bestselling contemporary authors write their own take on Jane Austen’s novels). I’ve been wondering whether to read any of these books for some time now and also meaning to read Val McDermid’s books, so when I saw this sitting on the mobile library’s shelves I thought why not at least have a proper look at it.

I first read Jane Austen’s Northanger Abbey many years ago (it could have been in the second year at Grammar School) and as far as I remember, despite loving Pride and Prejudice, I wasn’t too taken with it. I’ve been thinking of reading it again for some while now. I didn’t watch the TV adaptation a few years back, so I’m coming to both books with fresh eyes.

This is my copy with its awful cover: