I’m now up to S and T in my A – Z of TBRs, a series of posts in which I take a fresh look at some of my TBRs to inspire me to read more of them, or maybe to decide not to bother reading them after all. 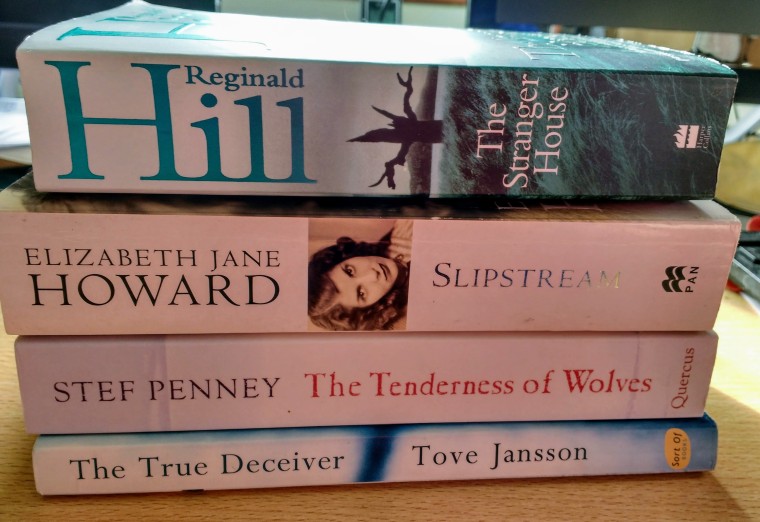 S  – is for The Stranger House by Reginald Hill, a book I’ve had a mere two years. I bought this because I love Hill’s books.

It’s a stand-alone book, a psychological thriller – no Dalziel and Pasco in this book. It’s set in Cumbria in a fictitious valley, Skaddale and village, Illthwaite, where the Stranger House offers refuge to travellers – people like Australian, Samantha Flood and Miguel Madero, a Spanish historian. The two of whom uncover intertwining tales of murder, betrayal and love. There are dark mysteries at the heart of this ancient place.

[Miguel] entered the Seminary in Seville at the age of twenty-three at the same time as nineteen-year-old Sam Flood entered Melbourne University, both convinced they knew exactly what they were doing and where the paths of their lives were leading them.

And yet neither yet understanding that a particular path is not a prospectus and that it may, in the instant it takes for a word to be spoken or a finger-hold to be lost, slip right off your map and lead you somewhere unimagined in all your certainties.

In the cases of Sam Flood and Miguel Madero this place was situated far to the north. (page 22)

S – is also for Slipstream: A Memoir by Elizabeth Jane Howard (1923 – 2014), the author of the Cazalet Chronicles. I’ve been meaning to read this for so long – it’s been on my shelves for 11 years, would you believe! It was published in 2002 when she was seventy nine.

This quotation comes from the final chapter of the book:

For the last two years while I have been writing this, I have been getting noticeably older. Getting old is a classic slipstream situation. It’s rather like that game Grandmother’s footsteps. I stand at the end of a lawn with my back to a row of the trappings of old age whose object is to reach me before I turn round and send them back to their row. One or two of these have caught me during the last five years: I have neither the health or the energy that once I had. In these respects I am not as young as I feel. Arthritis is dispiriting because it is both painful and incurable, and it takes time to become reconciled to it. I can’t – like my friend Penelope Lively – garden any more and that is for both of us a privation.

But on the plus side,  I am able to go on writing, I can sew and cook and have friends to stay and above all I can read. I continue to go to my women’s group; I can still learn. One of the good things about living longer is that we have more time to learn how to be old. It is clear to me now that inside the conspiracy of silence about age – because of the negative aspects of the condition – there is the possibility of art; that is to say that it can be made into something worth trying to do well, a challenge, an adventure. I don’t want to live with any sort of retirement, with nostalgia and regret wrapped round me like a wet blanket. I want to live enquiringly, with curiosity and interest for the rest of my life. (page 476)

T– is for The True Deceiver by Tove Jansson, a book I’ve had for three years. She is probably best known for her children’s books – the Moomin stories. I haven’t read those or any of her books for adults. But a few years ago I kept seeing her name cropping up on book blogs and thought I would like her books. This one is set in winter in a Swedish hamlet. A strange young woman fakes a break-in at the house of Anna Aemelin, an elderly artist, to persuade her that she needs companionship.

Her parents had lived long lives and never allowed anyone to cut trees in their woods. They’d been rich as trolls when they died. And the woods were still untouchable. Little by little they had grown almost impenetrable and stood like a wall behind the house; the ‘rabbit house’, they called it in the village. It was a grey wood villa with elaborate carved window frames in white, as grey-white as the tall backdrop of snow-drenched forest. The building actually resembled a large, crouched rabbit – the square front teeth of the white veranda curtains, the silly bay windows under eyebrows of snow, the vigilant ears of the chimneys. All the windows were dark. The path up the hill had not been shovelled.

That’s where she lives. Mats and I will live there too. But I have to wait. I need to think carefully before I give this Anna Aemelin an important place in my life. (pages 30-1)

T is also for The Tenderness of Wolves by Stef Penney, another book I’ve had for 11 years! It was the 2006 Costa Book of the Year.looking at it now I think one of the reasons I haven’t read it yet is that it appears to be written in a mix of the present and past tenses.

Set in 1867 in Canada, on the isolated settlement of Dove River a man has been brutally murdered, a woman finds his body and her seventeen-year-old son has disappeared. She has to clear his name, heading north into the forest and the desolate landscape that lies beyond it …

In this extract Thomas Sturrock is listening to a conversation between two men when he just has to ask them who they are discussing – is it a trader?

‘A Frenchie trader in Dove River was murdered. I don’t know if there’s more than one such there.’

‘I don’t think there is. You didn’t hear a name by any chance?’

‘Not that I remember off the top of my head – something French, is all I recall.’

‘The name of my acquaintance is Laurent Jammet’.

The man’s eyes light up with pleasure. ‘Well I’m sorry, I truly am, but I think that was the name that was mentioned.’

Sturrock falls uncharacteristically silent. He has had to deal with many shocks in his long career, and his mind is already working out the repercussions of this news. Tragic, obviously for Jammet. Worrying, at the least for him. For there is unfinished business there that he has been very keen to conclude, awaiting only the financial means to do so. Now that Jammet is dead, the business must be concluded as soon as possible, or the chance may slip out of his reach for good. (pages 34-5)

I’m not going to write very much about it because I read it straight through without marking any passages, or making any notes. I read for the pure pleasure of reading it, just as I had read the first four books, losing myself in the story of the Cazalet family. And it is a very large family by the time of this novel – 1956 – 1958. Some of the family are a bit blurry – the small children are a bit indistinguishable from each other, apart from Georgie, who loves animals and Laura who’s old before her time, both idiosyncratic little characters, and I did keep forgetting which children belonged to which parent and had to keep checking the family tree at the beginning of the book. But that is just a minor point.

It’s a lovely warm, old fashioned family saga, with both happy and sad events as the Cazalets move forward, and not successfully for all of them, in post-war England. It was a great treat! It’s made me want to re-read the early books and to read Slipstream, Elizabeth Jane Howard’s memoir.

I agree with Hilary Mantel’s quotation on the back cover:

Elizabeth Jane Howard is one of those novelists who shows, through her work, what the novel is for . . . She helps us to do the necessary thing – open our eyes and our hearts