Judith at Reader in the Wilderness has started a new meme for Fridays – Bookshelf Travelling for Insane Times.

1. Home.
2. Books in the home.
3. Touring books in the home.
4. Books organized or not organized on shelves, in bookcases, in stacks, or heaped in a helter-skelter fashion on any surface, including the floor, the top of the piano, etc.
5. Talking about books and reading experiences from the past, present, or future.

Whatever you fancy as long as you have fun basically.

I’ve made it simple by taking a photo of one of my bookshelves, so I didn’t have to think about which books to choose. I attempt to organise my shelves in a-z author order but without rearranging all my books I couldn’t insert these in the right places, so they have ended up on this shelf as a random collection of books.

There are 18 books on this shelf but the photo below shows just part of that shelf. 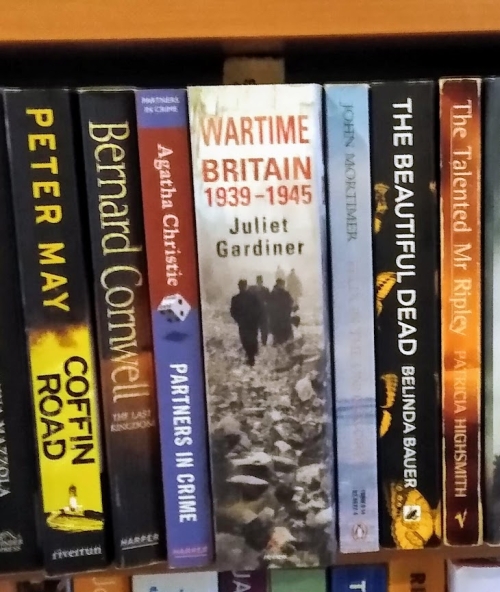 I haven’t read any of these books.

Coffin Road by Peter May, one of my favourite authors. It’s set on the Hebridean Isle of Harris, where a man stands bewildered on a deserted beach. He cannot remember who he is. The only clue to his identity is a folded map of a path named the Coffin Road. He does not know where this search will take him.

The Last Kingdom by Bernard Cornwell, the first book in the Last Kingdom series. It’s set in the England of the ninth and tenth centuries. These were the years when the Danish Vikings had invaded and occupied three of England’s four kingdoms, and when King Alfred, his son and grandson fought back and won the freedom of the country again.

Partners in Crime by Agatha Christie, another of my favourite authors. This book is a collection of her Tommy and Tuppence stories. I’ve some, but not all of these.

Wartime Britain 1939 – 1945 by Juliet Gardiner. This is a book I’ve had a long time and  I’ve dipped into it and read some short sections. It’s social history about how the war impacted the lives of men, women, and children on the Home Front in Britain.

Felix in the Underworld by John Mortimer, the author of the Rumpole books. In this novel a successful and self-contained novelist, Felix Morsom suddenly gets thrust into the underworld of London’s homeless, when a strange woman proclaims him the father of her son and he becomes a prime suspect in a murder case.

The Beautiful Dead by Belinda Bauer, crime fiction. Eve Singer is a TV crime reporter who finds that a twisted serial killer is using her to the publicity he craves. She has to decide how far she’s willing to go … and how close she’ll let him get.

The Talented Mr Ripley by Patricia Highsmith. This is this first novel about Tom Ripley: a young striver, newly arrived in the heady world of Manhattan in the 1950s. He wants money, success and the good life and he is willing to kill for it.

I’d love to get round to reading more of my TBRs whilst I’m in self-isolation!