‘He’d do what he always did, find the sweet among the bitter.’ 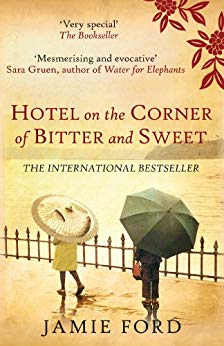 It’s not that often that a book brings tears to my eyes, but reading the ending of Hotel on the Corner of Bitter and Sweet did just that. It is a beautiful book moving between two time periods, the early 1940s and 1986, mainly in Seattle.

The old Seattle landmark has been boarded up for decades, but now the new owner has made a startling discovery in the basement: personal belongings stored away by Japanese families sent to interment camps during the Second World War. Among the fascinated crowd gathering outside the hotel, stands Henry Lee, and, as the owner unfurls a distinctive parasol, he is flooded by memories of his childhood. He wonders if by some miracle, in amongst the boxes of dusty treasures, lies a link to the Okabe family, and the girl he lost his young heart to, so many years ago.

I had little idea when I began reading this book how much I would enjoy it and how much I would learn from it. It moves at a much slower pace than I would like but this means that I could absorb the detail easily and follow the story without puzzling out the sequence of events. I had no problem at all in moving between the two time periods, as I have in some other books, the characters come across as real people with real lives and real problems. The settings are remarkable, even though I have never been to Seattle, and knew nothing about its history – its Chinatown and the Japan town, Nihonmachi – it came to life as I read on.

In 1942 in Seattle Henry Lee, a 12 year old Chinese American boy meets Keiko Okabe, a Japanese American girl and they become great friends, even though Henry’s father is against the Japanese because of the enmity between China and Japan. He makes Henry wear a badge “I am Chinese” so that people won’t think he is Japanese.

As the war progressed the persecution of Japanese Americans intensified and they were removed from their homes and interned. I knew this had happened after Pearl Harbour, but this book brings home the reality of the situation, of how their lives were uprooted and the prejudice and the terrible conditions that they experienced. Keiko and her family are moved to Camp Harmony, a temporary relocation centre at the Puyallup Fairgrounds, and not allowed to take their belongings with them. Many Japanese families, including Keiko’s, manage to store some in the basement of the Panama Hotel. Henry is devastated, certain he won’t see her again, especially when the families are moved to a permanent relocation centre, Minidoka in Idaho. But his search for Keiko didn’t end there and with the help of his friend Sheldon, a black jazz musician he continued to look for her.

The book is not just about Henry and Keiko it’s also about family relationships, about the importance of communication, of talking and sharing experiences and feelings and about friendships. And it’s a love story – of both a love lost and a love found as Henry and Keiko grow into adulthood. It is a bitter sweet story of commitment and enduring hope and one that I loved.

Jamie Ford grew up in Seattle’s Chinatown and Hotel on the Corner of Bitter and Sweet was his debut novel. His second novel, Songs of Willow Frost was published in September 2013. Love and Other Consolation Prizes, was published in September 12, 2017 and is also set in Seattle, inspired by a true story, about a half-Chinese orphan boy whose life is transformed at Seattle’s 1909 World’s Fair. And so one book leads on to yet more books to read …