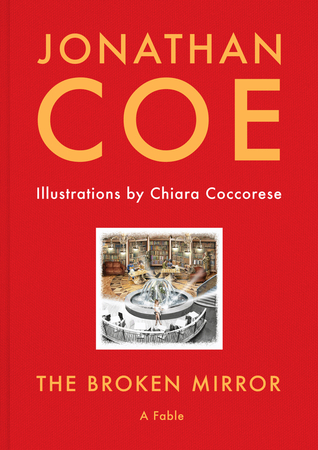 The Broken Mirror was first published in Italian in 2012. It is a collaboration between novelist Jonathan Coe and Chiara Coccorese, an Italian artist, and is described as ‘a political parable for children, a contemporary fairy tale for adults, and a fable for all ages.‘. It’s published by Unbound, a publishing house funded directly by readers

The hardback book is lovely to hold and the coloured illustrations are beautiful. It tells the story of Claire, a little girl of eight, who finds a fragment of a broken mirror in a rubbish dump behind her house. This is no ordinary mirror, as what she sees reflected in it is a beautiful world so unlike the real world around her. It’s a world full of colour, where her house is transformed into a castle, just like the sandcastle she had built at the beach on holiday – a fairy tale world, so much more exciting and magical than the real world. As Claire’s father remarks, Claire lives in a dream world.

By the time Claire reaches her teens she doesn’t look in the mirror as often. But she is dissatisfied with her life and, seeing her home town being spoilt by property developers and how badly immigrants are treated, she begins to look into it more and more, where she sees a better way of life. Then Claire meets other people who also have a fragment of broken mirror  – she is not alone with her dreams of a better world.

It is well written and I enjoyed reading it. Coe shows a society in crisis and how it might be improved. It’s a simple story, simply told but presenting important issues, ending with the possibility of a better future.

One thought on “The Broken Mirror by Jonathan Coe”