This week’s book is End in Tears by Ruth Rendell, one of the books for my 10 Books of Summer Challenge. 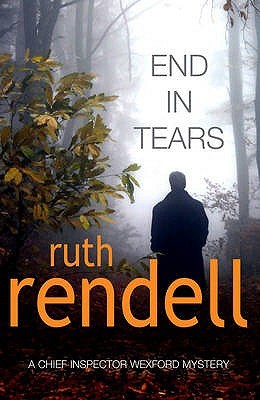 When he lifted it off the seat the backpack felt heavier than when he had first put it into the car. He lowered it on to the soft ferny ground. Then he got back into the driving seat to move the car deep into a cave made by hawthorn bushes and brambles, and the hop vines which climbed over everything in this wood. It was late June and the vegetation was very dense and luxuriant.

A lump of concrete dropped deliberately from a little stone bridge over a relatively unfrequented road kills the wrong person. The young woman in the car behind is spared. But only for a while…

A few weeks later, George Marshalson lives every father’s worst nightmare: he discovers the murdered body of his eighteen-year-old daughter on the side of the road.

As a man with a strained father-daughter relationship himself, Wexford must struggle to keep his professional life as a detective separate from his personal life as husband and father. Particularly when a second teenage girl is murdered – a victim unquestionably linked to the first – and another family is shattered…

I’ve had this book for about three years and I think I’ve started it once before – the opening chapter looks familiar. I’ve had mixed reactions to Ruth Rendell’s books, preferring the ones she’s written under the name, Barbara Vine. It may be one I’ll pass on – if you’ve read it do let me know what you think.