I finished reading Victoria: A Life at the end of January with a sense of sadness that it was over – I’d been reading it for three months and I have learned so much and enjoyed it immensely. Victoria was 81 when she died and had been Queen for nearly 64 years, from 1837 to 1901. She’d had 9 children and was grandmother of 42.

A. N. Wilson’s biography of Victoria is masterful, detailed and like all good biographies is well researched and illustrated, with copious notes, an extensive bibliography and an index. He had access to the Royal Archives and permission from Her Majesty Queen Elizabeth II to quote from materials in royal copyright. He portrays her both as a woman, a wife and mother as well as a queen set against the backdrop of the political scene in Britain and Europe.

Whilst I was reading I wrote three posts about different aspects of the book that interested me at the time – one on my thoughts soon after I started reading the biography, one on Christmas at Windsor in 1860 and one on Victoria and John Brown.

And now I’ve finished it I’m not sure what to write about it. It has fascinated me and surprised me. It surprised me because it is so extensive, with so much about her involvement in the politics of the time. It has made me want to know more about so many of the people – such as Lord Melbourne, Gladstone, who she disliked so much that when he stayed at Balmoral she wouldn’t speak to him, Disraeli who she liked very much and of course her beloved Albert.

I think A.N.Wilson himself sums it up best in this quotation:

‘Writing about Queen Victoria has been one of the most joyous experiences of my life. I have read thousands (literally) of letters never before published, and grown used to her as to a friend. Maddening? Egomaniac? Hysterical? A bad mother? Some have said so. What emerged for me was a brave, original woman who was at the very epicentre of Britain’s changing place in the world: a solitary woman in an all-male world who understood politics and foreign policy much better than some of her ministers; a person possessed by demons, but demons which she was brave enough to conquer. Above all, I became aware, when considering her eccentric friendships and deep passions, of what a lovable person she was.’ A. N. Wilson

and in the last paragraph of the book he wrote of Victoria’s greatness and the awe awe she inspired:

The awe is for Queen Victoria the woman. Step over the carpet to that plump little figure that sits at her table, state papers or a Hindustani grammar open in front of her, the Munshi or Princess Beatrice at her side. You are approaching someone of great kindliness, someone of a far sharper intelligence than you would have guessed, and someone who – contrary to the most tedious of all the clichés about her – was easily amused. but you are also, if you have your wits about you, more than a little afraid. You are in the presence of greatness. (page 575)

This was going to be my last post about the book, but I have placed so many markers in places of interest to me as I read that I think I may do at least one more just of passages that I’d like to remember. 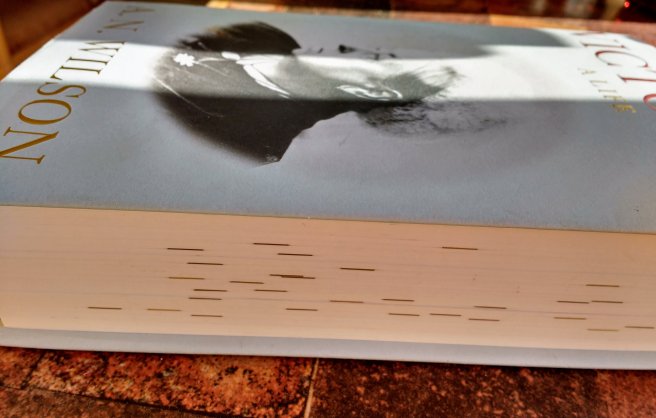