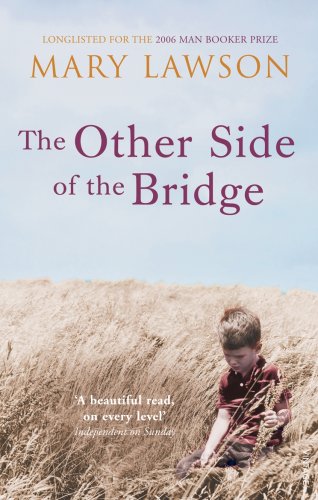 The Other Side of the Bridge is a beautiful book set in  in Northern Canada about two brothers, Arthur and Jake Dunn who grow up on a small farm near Struan (a fictional town) in the 1930s. The brothers are poles apart in nature. Arthur is older, shy but reliable and hardworking, whereas Jake, the younger brother is handsome, reckless, unreliable and a troublemaker. Their story spans the 1930s and 1940s as they grow up through the Depression years and the Second World War, up to the early 1960s.

It’s also the story of Ian, Dr Christopherson’s son, beginning in the late 1950s when he became infatuated with Arthur’s wife Laura. I think the dual time frame works well, moving almost seamlessly between the years, and the characterisation is excellent. I was totally engrossed in the story and able to visualise the scenery, including the Ojibway reserve where Ian’s school friend Pete lived:

He [Ian] cycled down Main Street to the outskirts of Struan, which took all of three minutes, and then out along the road to the Ojibway reserve, which took a further five. The reserve was spread along the shore of a bay, with a point of land jutting out into the lake between it and Struan, a symbolic barrier as well as a geographic one. The road ran out of pavement half a mile before it reached the reserve, and the land itself was so low it would grow nothing but bulrushes and bugs – black flies by the million in early summer then mosquitoes big enough to pick you up and carry you away. The reserve store, though where Peter Corbiere lived, was situated right down by the lake, which meant it got the benefit of the wind and was less buggy than the rest. Pete’s grandfather was sitting on the steps when Ian arrived, smoking and staring off into the woods. He had scars on his fingers from letting cigarettes burn down too far. (page 18)

There is much joy in this book mixed in with immense sorrow and pain. The title of the book refers to the time before and after a shocking incident on the bridge  – a roughly made bridge across the river that separated the Dunns’ and their neighbours, the Lintz’s farms. It was a shortcut that saved more than a mile. The River Crow was fifteen feet below the bridge as it boiled its way over rocks. That incident changed not only Arthur’s and Jake’s lives but its effect lingered on the their community the rest of their lives.

The Other Side of the Bridge is Mary Lawson’s second novel. I loved her first, Crow Lake (which I read ten years ago) and I love this one just as much. It’s one of the best books I’ve read this year. It was longlisted for the Man Booker Prize in 2006, which was won by Kiran Desai’s The Inheritance of Loss.