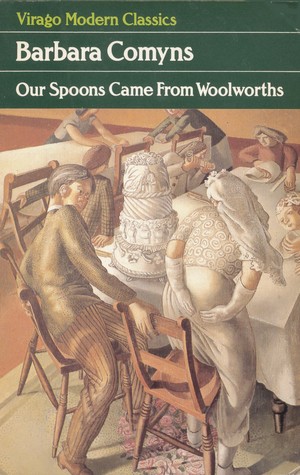 I read Our Spoons Came From Woolworths by Barbara Comyns for the What’s in a Name Challenge (in the category of a book with item/items of cutlery in the title). It’s a book that I’ve been meaning to read for years.

Description from the back cover:

Pretty, unworldly Sophia is twenty-one years old and hastily married to a young painter called Charles. An artist’s model with an eccentric collection of pets, she is ill-equipped to cope with the bohemian London of the 1930s, where poverty, babies (however much loved) and husband conspire to torment her.

Hoping to add some spice to her life, Sophia takes up with Peregrine, a dismal, ageing critic, and comes to regret her marriage ‘“ and her affair. But in this case virtue is more than its own reward, for repentance brings an abrupt end to the cycle of unsold pictures, unpaid bills and unwashed dishes . . .

I quoted the opening and an extract from page 56 in one of my Friday Posts. Now I’ve finished the book I understand the opening sentence ‘I told Helen my story and she went home and cried’, because it’s such a sad and, in parts even a tragic, story. As the synopsis indicates this is set in 1930s London and Sophia and her husband Charles (both artists) live a life of poverty whilst he struggles to sell his artwork. Actually Charles contributes very little money and it is left to Sophia to earn whatever she can working in a commercial art studio and as an artists’ model.

Their marriage is blighted by Sophia’s money worries and Charles’s cavalier attitude to life. Things get worse when Sophia realises she is pregnant – Charles had told her before they were married he never wanted to have children – and she realises too late that her idea of birth control as being a matter of controlling your thoughts and thinking very hard, and saying ‘I won’t have any babies’ was quite wrong!  After the birth of Sandro, a harrowing experience that makes me so thankful for the NHS, their situation deteriorates even further.

Despite their circumstances, Sophia tells her story in a casual, matter of fact way, with much humour. Sandro is a small, sickly baby and Sophia was afraid he would die. She also thought that if she applied for free milk the council would take him away if on the grounds that his parents had no visible means of support. Charles is no help to her at all, he dislikes Sandro and wants him out of the way:

‘Babies have no feelings and would be just as happy in an orphanage as anywhere else.’ On the other hand, he would be much happier of the baby was out of the way, so to send him to a ‘home’ was much the most reasonable thing  to do. (page 71)

Theirs is a life of hardship and heartbreaking tragedy, but Sophia’s spirit is not broken despite the tragic events that descend upon her. From a lighthearted and comic beginning the mood of the novel darkens as it moves towards an inevitable tragic climax. What seems to make it even more tragic is the conversational tone in which it is all told, concealing such real pain. However, the novel does not end with tragedy – it is not all doom and gloom and as the opening page reveals Sophia survives to tell her story:

… it all happened eight years ago, and I’m not unhappy now. I hardly dare admit it, even touching wood, but I’m so happy that when I wake in the morning I can’t believe it’s true. I seldom think of the time I was called Sophia Fairclough; I try to keep it pushed right at the back of my mind.

Our Spoons Came From Woolworths is a semi-autobiographical novel as indicated by this note at the beginning of the book:

The only things that are true in this story are the wedding and Chapters 10, 11 and 12 and the poverty.

Thankfully the really tragic events do not occur in these chapters. There are moments of comedy and humour throughout and the novel is written in a light, chatty style. It is a portrait of life in the Thirties, a life ruled by poverty and hardship and of a marriage destroyed by circumstances and personalities.

Barbara Comyns (1909 – 1992) began to write and illustrate her stories as a child. Our Spoons Came From Woolworths, first published in 1950 was her second novel.

3 thoughts on “Our Spoons Came from Woolworths by Barbara Comyns”