Notes on Night Falls on Ardnamurchan: the Twilight of a Crofting Family by Alasdair Maclean (1926 – 1994).

Alasdair Maclean was a Scottish poet, born in Glasgow. He left school at fourteen to work in the Clydeside shipyards. In his late thirties he read English at Edinburgh University, later returning to the family croft at Sanna in Ardnamurchan to write. His father had worked as Deputy Harbour Master in the Greater Glasgow docks until he retired in the 1950s and moved back to take over the croft from his father.

What their life was like on the croft is captured in detail in Maclean’s only book of prose Night Falls on Ardnamurchan: the Twilight of a Crofting Family.

The main section of the book is made up of extracts from his father’s journals forming a factual account of his daily life on the croft covering two years, a decade apart: 1960 and 1970, for the same three days at the beginning, middle and end of every month in those years, with explanatory comments where he thought necessary.

I  enjoyed this section together with the Prologue and two introductions – the first about his father and their relationship and the second, a brief history of Ardnamuchan – more that the section on Alasdair’s own journal of 1979 – 1980.

I quoted the opening of the book with an extract from page 56 in this earlier post. Here are a few more extracts to give a flavour of the book:

Due to Father’s complete lack of push, coupled with his unwillingness to flatter or connive, he was passed over for promotion on several occasions. In the early 1950s he retired, somewhat prematurely, and came back to Ardnamurchan to operate the family croft, which my grandparents were getting too old to look after. Poverty accompanied him north and this lasted till a state pension at sixty-five brought some slight ease. He died five months after my mother of a coronary, they said, but of being worn out and heartbroken, say I. (page 23)

Each journal entry begins with a description of the weather and its effects. This is a typical example:

Moderate to fresh Southerly wind became strong in evening. Drizzle in early forenoon. Dry for an hour in the middle of the day. In the afternoon the sleety rain became torrential and continued into the night. Did a little more to a new house for Tilly. Gave cattle a little hay. Managed across river at Cnoc Brac peats.

Alasdair commented: Tilly was a pet sheep, the first of many orphans we hand-reared. She was a privileged character (I tell her story later) and no ageing butler, slopping sherry around the salver on his tottering passage between pantry and drawing room, could have been more conscious of possessing security of tenure or more determined to exploit it. The ‘house’ that was being built for her was but one indication of her status. Your ordinary sheep shivers it out on the hillside all night, having no roof but the low cloud of winter. (pages 84-85)

The state of the weather had great importance. To the crofter:

…  clinging by a mixture of instinct and experience to the remote fringes of these islands, the weather is a god. It is the difference not merely between a pleasant and an unpleasant life, but between success and failure, until the advent of the welfare state between – possibly – living and dying.  (page 52)

Winter is hard on Sanna:

Gales often blow for days on end, accompanied for much of the time by rain. The ground around house and outbuildings, with the constant to-ing and fro-ing of animals and people becomes a churned-up quagmire, a constant drag and hindrance to everything one tries to do.

… Even to enter or leave one’s house, if it lacks a back door – and most of the old cottages did – may be a hazardous operation in a gale and a door once opened may not be easy to shut again. I have seen old people in Sanna go from house to steading on hands and knees, being unable to proceed any other way. (page 52)

This is an unusual book describing not only life in a dying community but also revealing the relationship between children and parents, particularly in an isolated community. I was fascinated.

I was also interested to know what Ardnamurchan is like today. The Ardnamuchan website states it is on the most westerly peninsular of the British mainland, jutting out into the Atlantic Ocean and with views from every shore of islands, castles, lochs and wilderness, an amazing part of the West Coast of Scotland. 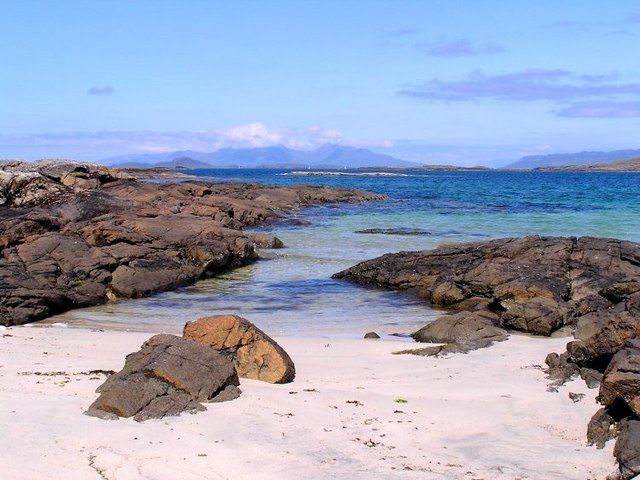 Sanna Bay (The copyright on this image is owned by Stuart Wilding and is licensed for reuse under the Creative Commons Attribution-ShareAlike 2.0 license.)

3 thoughts on “Night Falls on Ardnamurchan by Alasdair Maclean”